The second annual Edelman Trust in US Financial Services study shows that nearly half say their trust in financial services firms fell in 2010, citing ‘honest communication,’ ‘transparency’ as keys to reputation.

According to Edelman’s research, trust in US banks plummeted steadily since 2007. A similar study from Forrester in early 2010, concluded that roughly 70% of big bank customers don’t trust their banks. And a Harris poll found that bank reputations have suffered, as few Americans find statements by financial institutions believable. 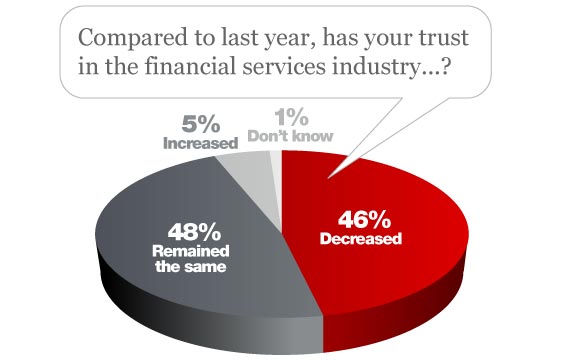 Edelman’s 2011 study revealed that among the 46% whose trust levels declined, most (57%) cited financial services companies “acting in a greedy manner,” while another 18% asserted that the “industry itself has made the problems worse.”

“The way people perceive companies has changed significantly since the pre-crisis era,” said Matt Harrington, CEO/Edelman US. “The decline in trust in these institutions — even as financial markets were recovering — underscores the long road back they must travel to re-earn the lost trust.”

“While content-rich websites and fast and responsive customer service are important no doubt, but they are table stakes,” said Jeff Zilka/GM Financial Communications at Edelman. “What consumers are hungry for — and what financial services companies must deliver if they are to restore customers’ trust — is honest communication and the reality of open and transparent business practices.”

Community and regional banks trusted most

Only 49% of respondents said they trust financial institutions in general. Community or regional banks scored highest in the survey (67%), with mutual fund companies second at 55 percent. Life insurance companies (42%) and property/casualty insurers (37%) ranked in the middle of the pack but well below the 50 percent level, and investment banks (35%) and private equity firms (32%) were least trusted. 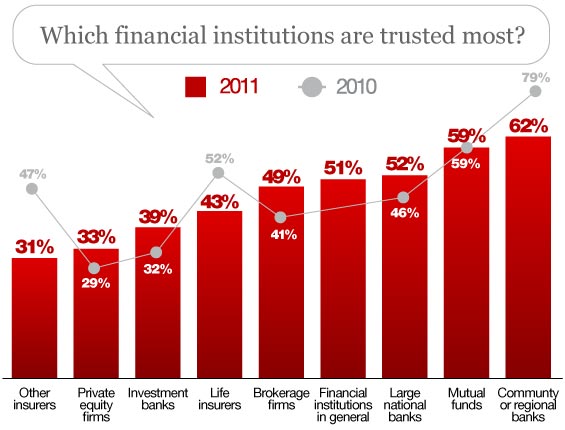 When considering the factors most important to the overall reputation of a financial services company, those surveyed ranked “honest communication” (91%) and “open and transparent business practices” (84%) at the top. 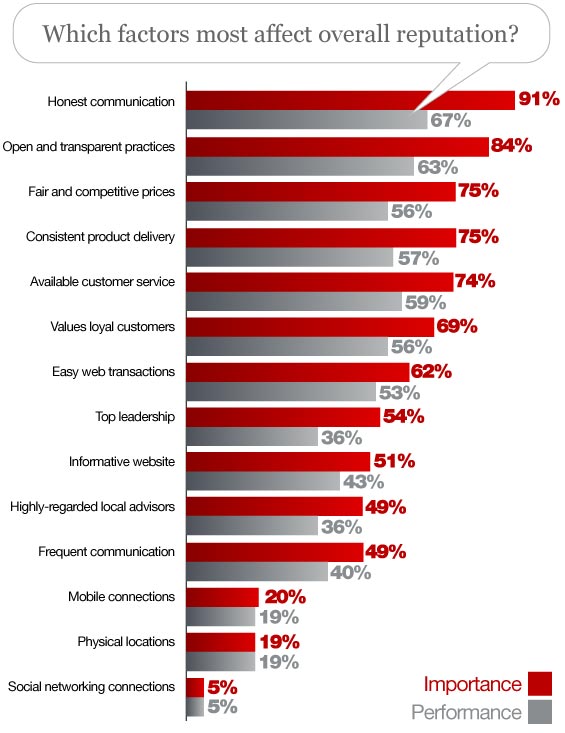 “What this means,” said Edelman’s Zilka, “is that C-Suite executives must dig in and externally communicate the values of their institutions while internally setting high standards for honest communication and transparent business practices.”

You have to mean what you say, say what you mean, do what you say and live up to your promises. As long as people think financial institutions are acting in their own interests, bank brands will continue to suffer. Trust is the bedrock of every brand.