A social media white paper released by Fiserv, the leading global provider of financial services technology solutions, says that “11% of online consumers are currently connected with their bank or credit union through a social site.” Fiserv’s white paper was based on an August 2010 survey of 3,000 U.S. consumers who had checking accounts.

This finding — that 11% of online consumers are connected to their financial institution via a social networking platform — is shocking. Could this really be true?

Let’s break it down and take a look at the math. Out of 307 million people in the U.S., 231 million of them are online, or 75.2% of the country. That means a financial institution with one million customers — we’ll use the fictitious “Acme Bank” as an example — could feasibly reach 750,000 people via social media. If Fiserv is right and 11% of Acme’s customers are indeed already connected to Acme Bank through social networking platforms, then Acme would have a following/community that totaled 82,500 people. 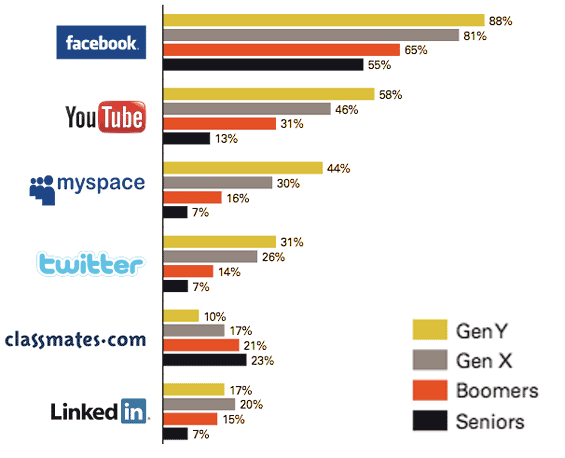 MySpace is effectively dead, and Joe Consumer doesn’t use Classmates.com or LinkedIn to connect with businesses, so really we’re talking about Facebook, Twitter and YouTube. (There are other platforms like blogs, but those weren’t included in Fiserv’s study.)

Now let’s look at reality. Bank of America has at least 50 million customers. According to Fiserv’s study, BofA’s social media following should total over 4 million people. They should, Fiserv’s study suggests, have nearly 1 million Twitter followers. And yet the bank’s five separate Twitter accounts have a combined total of 16,096 followers. That’s only 0.45% of BofA’s customers who are online, missing the result in Fiserv’s study by 10.55%.

How many Facebook Fans does BofA have? Zero. Because BofA doesn’t have an official Facebook page. But when you add up all the unofficial Facebook pages together (including the Bank of America Sucks group with 1,850 fans and BofA’s Chicago Marathon page with 15,000), the total isn’t more than 50,000 people. Even if BofA were to reach 500,000 people via social media, that’s still only 1% of the bank’s customer base.

Wells Fargo’s social media exposure includes two Twitter accounts, three YouTube channels, four blogs and five Facebook initiatives. Out of 48 million customers, they have a total of 4,096 Facebook likes (0.009% of customers) and 13,415 Twitter followers (0.028% of customers). Videos uploaded to Wells Fargo YouTube channels have been viewed 108,540 times. To put that in some perspective, The Financial Brand’s YouTube videos — mostly bank and credit union commercials — have been viewed 450,486 times.

Reality Check: You can repeat this analysis for nearly every bank and credit union in the U.S. and you won’t find anywhere near 11% of customers connected via social networking sites. Even 1% is overly optimistic.

A white paper like Fiserv’s is widely celebrated by consultants, recirculated by the trade press and embraced by financial institutions because it tells everyone what they want to hear; it reinforces what they want to believe. Everyone wants the social media hype to be true so badly that they swallow favorable studies without much analytical scrutiny or intellectual skepticism.

When Fiserv serves up a white paper with a leading datapoint that’s as wildly implausible and statistically indefensible as “11% are socially connected to their bank,” you have to question the white paper’s other conclusions:

The Financial Brand isn’t alone. As bank branding expert Brady Walen said on Twitter, “I have a hard time believing that 45% of Gen Y is interested in connecting with their bank or CU on a social site.” Another financial branding consultant quickly agreed.

Here’s Fiserv’s presentation, or you can download the full white paper. Take a look for yourself and see what you think.