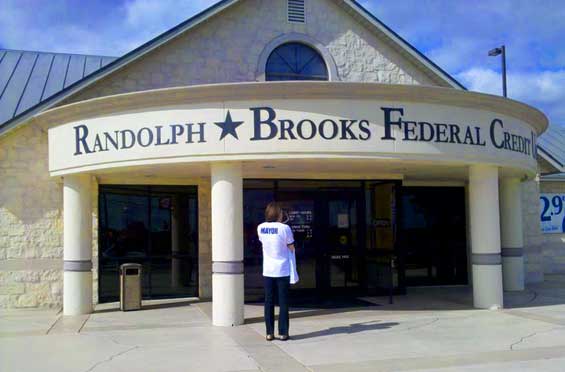 Randolph-Brooks Federal Credit Union and United Way of San Antonio are conducting a social media experiment. The question: Will people use social media to benefit others?

Through RBFCU’s “Check in for Charity” promotion, people can trigger a $5 donation to the United Way by checking in on Foursquare or by taking a picture of themselves in front of a Randolph-Brooks branch and sharing it on Facebook or Twitter.

According to the promotion’s rules, participants can take a photo of themselves outside one of four branches in a designated area where RBFCU signage is clearly visible. Facebook users must post the photo to the RBFCU page stating which branch they visited. Twitter users must tweet the photo and mention @RBFCU or use the hashtag #RBFCUGives. In the promotion’s first 14 days, it doesn’t appear that anyone has yet submitted a photo via Twitter.

Foursquare users merely need to check in. (You can see check-in traffic volumes for each of the four participating branch locations here, here, here and here.)

The promotion is open to everyone, both credit union members and non-members. Participants may check in at each branch location once per 24-hour period.

The credit union is also giving t-shirts to the Foursquare mayors at each of its branch locations. To claim the prize, the mayor must show proof of mayorship to branch management, and that person may be required to sign a release of liability form.

“We are trying out a social experiment to see whether the opportunity to give to others motivates people to check in through social media,” Natalie Stone-Tate, public relations officer for RBFCU, told the San Antonio Business Journal.

“We actually got the idea because two customers who use social media a lot were battling it out for the RBFCU mayorship on Foursquare,” said Stone-Tate.

Back in March, TechCrunch held a similar promotion promotion at SXSW, a huge tech convention held annually in Austin, 75 miles away from San Antonio where Randolph-Brooks FCU is based. The name of the TechCrunch/SXSW promo: “Check-In for Charity.” Coincidence?

“Based on the tumultuous economy of the past couple of years, people may not be able to give charitably at the same levels as in the past,” said Sonya McDonald, VP Sales & Marketing/RBFCU. “But they can feel good that a simple stop at their local Randolph-Brooks branch makes a difference for their community.”

Randolph-Brooks Federal Credit Union has 336,000 members, 37 branches and more than $4 billion in assets. The credit union has over 1,250 followers on Twitter and nearly 2,000 fans on Facebook.