Growing interest in 'request for pay,' a secure messaging channel for real-time payments, opens the door for major payment system changes. RfP enables customers to transact through secure messaging without using the ACH or card networks. Banks that want to gain a competitive advantage (and offset lost fees) should prepare for this trend now.

An emerging payment trend could speed the transition to real-time payments in the United States, presenting significant challenges — as well as opportunities — to banks and credit unions. Already growing in use among big-bank users of The Clearing House Real Time Payments Network, expansion of real time payments is expected to pick up speed when the Federal Reserve turns on its long-awaited FedNow program.

A less-well-known — but crucial — element of real-time payment adoption is request for pay (RfP) (known as request to pay in Europe). RfP creates a secure messaging channel between the payee and the payer, enabling the biller to initiate the transaction.

“At its core, RfP is a secure messaging capability that establishes a secure connection between the biller and the payee,” Andrew Ducker, Senior Payments Consultant at Icon Solutions, told The Financial Brand.

Request for pay has many applications. In one, it can enable one-click payments on mobile apps and via text message for a variety of payments — including recurring bills and one-off purchases.

Leading banks have already piloted — or launched — RfP applications. U.S. Bank, for example, began offering RfP capabilities to corporate billers in the fall of 2021 and announced that its consumer and small business customers would be able to receive RfP messages by text or email that a bill is owed beginning in Q1 2022.

Benefits of Request for Pay for Banks and Their Customers

Icon Solutions surveyed more than 50 stakeholders in leading retail and global corporate banks regarding request for pay. They found that 87% believe RfP is a good alternative to direct debits, while 71% think it will reduce merchants’ dependency on payment cards. Approximately three-quarters of respondents strongly agree that demand for RfP from corporates is increasing. Corporate users can benefit from reduced costs and increase visibility.

For consumers, RfP could enable them to make a payment during a call center conversation with an insurance provider without sharing sensitive payment information.

In most request-for-pay applications, bill payments could be simplified to the extent where the consumer has to do little more than click one button to make a payment.

“Request to pay completes the transaction end-to-end,” says Ducker. “It enables the card number, the payment details, reference number and everything to be populated automatically as part of the request message.”

In addition to convenience with one-click payments, RfP could also enable consumers more flexibility and control as to when they make payments. They can respond by paying the bill in full or make a partial payment, or they can schedule the payment, notes Sarah Grotta, Director, Debit Advisory Service, at Mercator Advisory Group, in a blog. And because it’s real-time, when the payment is sent from the consumer’s checking account, it is received immediately by the biller, with all the necessary payment details, Grotta states.

Read More: The Future of Payments in Banking is Fast, Seamless and Embedded

Businesses and other payment recipients using RfP would benefit through clearer invoicing with fewer manual entry errors and smoother payments reconciliation, Ducker notes. Retailers could use RfP to streamline payments online and in-store by automatically providing payment account details, using an account-to-account payments infrastructure that would enable it to be completed in seconds.

Significantly, the ability to bypass traditional payment rails could offer substantial savings for payees. “For some businesses, card fees can run 2% to 4%,” Ducker observes. Using real-time payment with RfP could reduce the merchant’s cost of accepting payment. While a big plus for card-accepting customers, that feature will clearly reduce card issuers’ and payment processors’ revenues.

FedNow, the Fed’s real-time payment network set to launch in 2023, will lead to a sea change in transaction fees, many expect. It will offer new entrants and institutions a way to jump off traditional payment rails, meaning many of the largest U.S. banks stand to lose enormous interchange fees.

As shown in the chart below, most banks recognize this possibility. 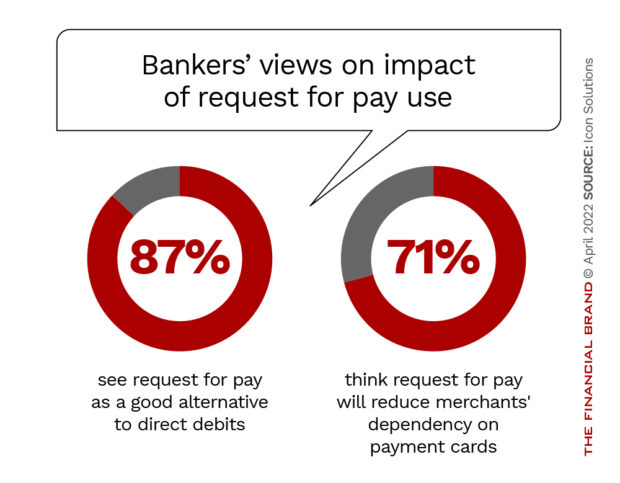 Offsetting this downside are possibilities for other revenue sources as part of banks’ business banking or treasury management offerings. Consumers may not represent much of a revenue source from use of RfP but businesses will benefit in many ways including receiving funding instantly instead of waiting three to four days. In addition, Drucker points out that the direct connection with the consumer accounts could also make it easier and more efficient to manage late payments.

Accenture notes that RfP could offer businesses additional benefits, especially when combined with open banking. Accenture analysts point out that because financial institutions have already established trust with their customers, they are uniquely positioned to facilitate the exchange of RfP messages.

Adoption Is Picking Up Speed After a Slow Start

So far, the biggest request for pay deployments have happened in Europe. In the U.K., request to pay was launched in May 2020 as a secure messaging framework to run over existing payment infrastructures. On the continent, SEPA (Single Euro Payments Area) introduced an RtP scheme with a rulebook that that takes effect in June 2022.

However, RfP has been gaining more traction in the U.S. JPMorgan Chase announced an RtP option for B2B payments in summer 2021. Just after that, BNY Mellon, Citi and Verizon announced a consumer bill pay solution using RfP. It enables consumers more flexibility in paying their cell phone bills, such as on their next recurring payday or as a direct payout from a gig job.

“While setting up automatic payments is convenient for many customers, living with weekly budgets or irregular income streams can be a challenge,” said Kate Luft, Head of Retail U.S. Segments and products at Citi in a statement.

The U.S. Bank move mentioned earlier added RfP capabilities to its U.S. Bank eBill Service, enabling consumers to have their bills delivered directly through their bank’s website or app.

Why Some Banks Lag in Adopting Real-Time Payments

Despite the opportunities and growing interest in real-time payments, there’s still a big gap between attitudes and actions among financial institutions. Icon Solutions found that few bank respondents to its survey had launched RfP initiatives (18%) or put them on their short-term roadmaps (27%). The biggest obstacles noted were bank readiness (67%), strong customer authentication (54%), and standardization (48%). In addition, many banks remain constrained by a clear lack of strategy and existing technology.

“Banks aren’t necessarily going to lead the RfP charge because they have more to lose from their established revenue flows.”

“Banks will have to look into the individual use cases because there is no one-size-fits-all application for RtP,” says Ducker. “Yet banks know the fintechs have advantages in the space, and they will need to react as they gain market share.”

Many U.S. banks haven’t yet adopted RfP because there’s “a lot of work” to be done in supporting the infrastructure, says Sarah Grotta. She believes it will take another three years at least for U.S. banks to bring the technology mainstream. “It’s a pretty heavy technical lift, and there are only a handful of financial institutions in the U.S. that have the capability to both send, receive, and also process a request for pay message,” she observes.

That doesn’t mean do nothing. Banks and credit unions should develop their payments modernization strategy and determine what real-time payment capabilities will be most important to their customers. Most banks will start by developing the ability to receive real-time payments before sending real-time payments, according to Grotta. “Often, the last step will be to send and receive through request for pay messaging,” she says.