In less than a day, Google News listed no less than 300 different stories about the failure of three corporate credit unions. Many reports inaccurately characterized the conservatorship of these institutions and the NCUIF payback plan as a “bailout.” Regardless of the truth and how it all works, a significant portion of the public isn’t happy about it.

The Wall Street Journal’s article, “Credit Unions Bailed Out,” was besieged with over 374 comments. The Huffington Post’s article generated 287 comments Yahoo! had 188. Fox over 100.

In a 24 hour period, around 500 people mentioned “credit unions” on Twitter, 95% of them spreading the word about the “bailout.” Scanning recent tweets reveals a range of dour reactions: 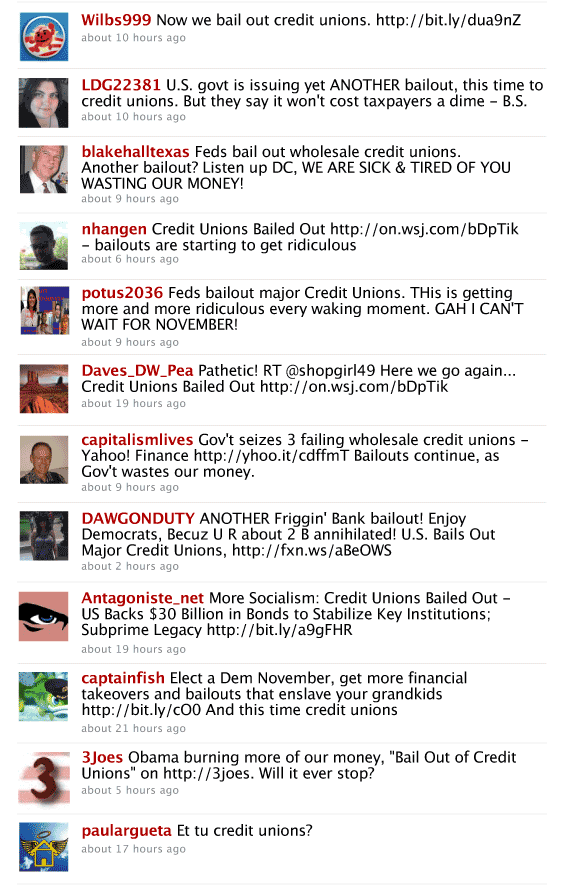 Are Credit Unions a Safe Choice? Most troubling to credit unions are the ripples of fear consumers now feel when they hear someone mention “credit unions.” How deep and widespread are these feelings? [Actual comments from the public on news articles are italicized.]

Credit Unions Are No Better Than Banks. Read some people’s comments and you’ll realize how many folks now see zero difference between banks and credit unions. This event has pushed plenty of people from merely “jaded-and-skeptical” to full-tilt pathological cynicism. “See! Anyone involved in banking is a no-good crook. Credit unions are just as culpable for the mess we’re in as anyone else.” To these people, there are no “good guys” wearing white capes. “Thieves, every last one of them…”

Great, Another Kick to the Balls… To plenty of Americans, the news of credit unions failing is just one more sour reminder of how bad things really are. Economists may say the recession is over, but tell that to the 10% who are still unemployed. And now, credit unions, who were supposedly one of America’s safest institutions, need a bailout too? It leaves many people with a sense of helplessness, depression and resignation. “Great…What next?” Consumers feel shell shocked, ambushed and betrayed.

My Tax Dollars?!? Some people leaving comments are savvy and sensitive to credit unions’ tax exemptions:

It’s a Democratic Conspiracy. Many Republicans hear the word “union” and immediately suspect a Democratic plot to curry votes. Those on the far right rush to connect Obama, socialism, bailouts and anything containing the word “union.” This serves as another sore reminder to America’s financial cooperatives that the term “credit union” is a hindrance.

Reality Check: Read the comments on any news story and you’ll see how uniformed, angry, illogical and uneducated people are. They will believe what they want.

Conclusion. Credit unions need to take a close look at what people are saying around the internet and on Twitter, then think about how they should respond. What can be done to prepare staff with answers? How can credit unions help clarify consumers’ confusion? What can the credit union industry do to combat press inaccuracies and distortions? Will credit unions manage a PR response? Or will they flounder, stunned and unable to coordinate resources?

Most importantly, what affect will this have on consumers’ perceptions of- and trust in America’s credit unions?

Meanwhile, consumers may be wondering what impact this will have on their bottom line: