With over five million customers and a focus on sustainable finance, Aspiration is now breaking into the B2B market. As they prepare to go public, its strategy couldn't be more different from its competitors.

It’s an open question how many neobanks will stand the test of time, compared with regulated legacy banks and credit unions. There are several hundred of these digital-only banks out in the world now, but only a handful at the top have gained a reputation as true primary banking providers.

Aspiration is aiming to join that collection of elite companies. But its strategy is wholly unique from even other neobank competitors. For one thing, it has neither a banking charter nor does it use a partner bank, relying instead on cash management (investment) accounts versus deposits.

The term “neobank” hadn’t been coined when Andrei Cherny and his small team launched Aspiration in 2015. But, they knew they wanted the newcomer to look unlike any other financial institution. Their big idea would be that people could pay whatever fees that they chose (which could be $0), instead of relying on overdraft, late, out-of-network ATM and service fees for revenue. They wouldn’t have a single branch and the bigger they grew, the more positive social impact they would have on the world by helping consumers reduce their individual carbon footprints.

Big dreams. Were they too lofty?

Cherny wasn’t a novice in the public sphere in 2015 when he launched Aspiration. He had already spent years working with some of the most influential U.S. politicians: he started his political career working with Al Gore in the ’90s, wrote speeches for President Bill Clinton and helped Elizabeth Warren establish the CFPB.

Before all that, Cherny had been a Navy Intelligence Officer, joining up shortly after 9/11. In addition, he ran for State Treasurer of Arizona in 2010 on the idea of making Arizona “The Solar State”.

Cherny has maintained his “A-List” creds by signing up Leonardo DiCaprio to join Aspiration’s Advisory Board (as well as being an investor).

Read More: Chime Leads U.S. Neobanks With Aspiration and Current on Its Heels

How Customers Can Offset Their Carbon Footprints

Part of the mission of Aspiration is to enable people to reduce their carbon footprint significantly by doing the things they do daily anyway.

“We’re in a place right now where most people want to do something about climate change, and yet they don’t know where to start,” Cherny tells The Financial Brand. “They oftentimes don’t necessarily think their bank is a part of that answer. The truth is that changing banks is probably the single biggest thing they can do to lower their carbon footprint.”

People try changing the products they’re using and recycle, which can ultimately make a difference in lowering a person’s carbon footprint, says Cherny. Yet he maintains that if they also continue to deposit their funds at a financial institution that has yet to divest from fossil fuels, then the likelihood of that person actually becoming net zero in their carbon footprint is very low.

Cherny maintains that not only is Aspiration not investing in fossil fuel projects, but helping boost its customers environmental influence by planting trees every time they use their Aspiration debit or credit card. He states that Aspiration is “probably the largest private sector tree planting operation in the world.”

On the fintech’s website, people can use a simulator to see how many trees Aspiration will plant on their behalf. For instance, if a person were to use their debit or credit card three times a week, 156 trees would be planted a year. 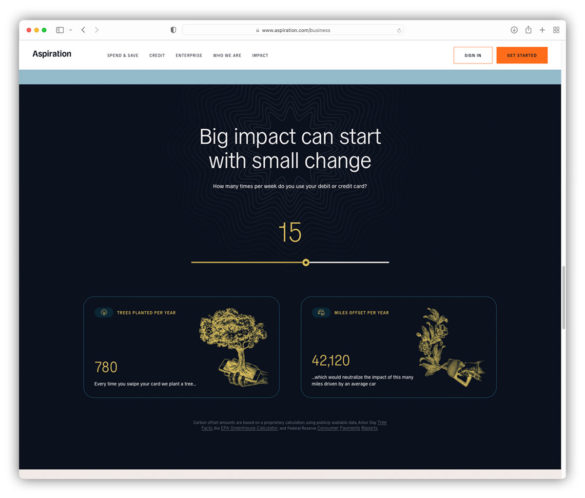 “We funded the planting of 50 million trees in just the last year alone, which is as many trees as there are in Central Park being planted every three hours,” the CEO boasts. While they facilitate planting trees globally — relying on non-profits and NGOs for execution — most of the planting takes place in Africa and South America, where the trees “can grow the fastest and have the most immediate climate impacts.”

The fintech’s credit card, called Aspiration Zero, was launched in mid-October 2021. It is made from plant-based material instead of plastic. In addition to planting a tree every time they swipe a card, customers can round up their purchase to potentially plant yet another tree. 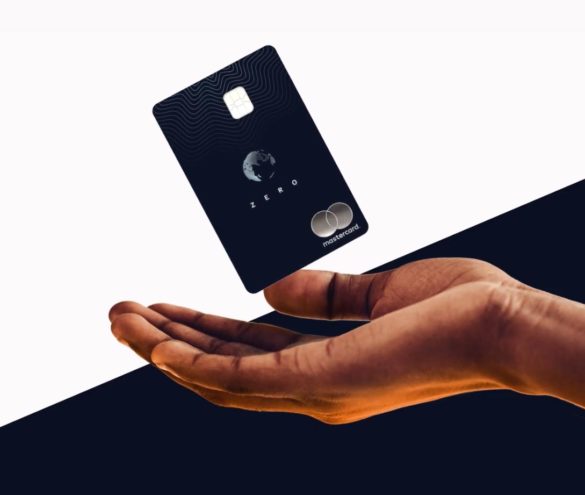 In mid-January 2022, Aspiration acquired Carbon Insights, a climate technology software company with an algorithm that tracks spending behavior and transactions to determine an individual’s carbon footprint.

“Understanding your carbon footprint is the first step in being able to do something about reducing or eliminating it entirely, so we are excited to welcome them onboard to work toward delivering an unparalleled solution for individuals and enterprises to take control of their carbon footprints,” Cherny said in a press release.

Carbon Insights will work as an extension of Aspiration’s AIM program — Aspiration Impact Measurement — which determines a person’s “sustainable score” and shows people how socially conscious the businesses they shop at are.

For several years, Aspiration only worked with consumers. But, it didn’t take long for businesses to start approaching Cherny and his team, saying that they too have customers asking them for more sustainability initiatives. To build out solutions for businesses, Aspiration launched its Enterprise program — a three-step system that helps businesses learn about their Scope 1, 2 and 3 carbon emissions and how to take steps to mitigate their carbon footprint. 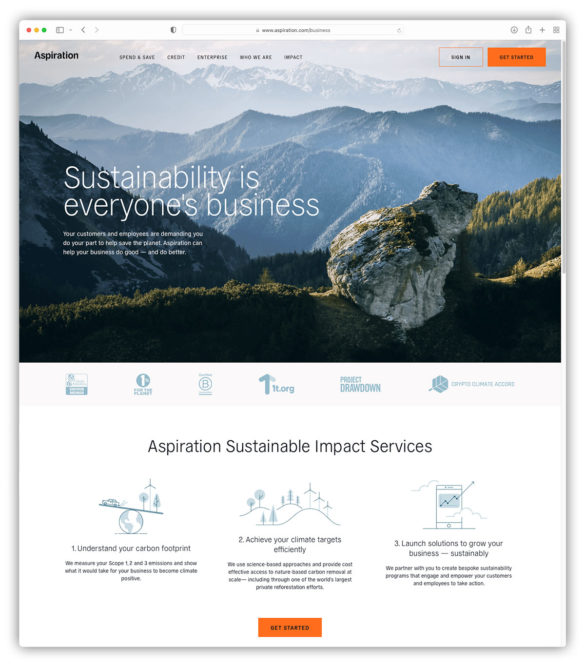 Scope 1 emissions are direct emissions, which come right from a company’s own operations. Scope 2 and 3 are indirect — from carbon emissions through purchased energy production in the case of Scope 2, and from bigger-picture issues, such as business travel on an airplane or waste generated at the business, with Scope 3.

One of the businesses Cherny says Aspiration is working with is the Los Angeles Clippers basketball team, which will be moving into their new stadium — the Intuit Dome — in 2024.

“It will be the first climate-positive sports arena in the world,” says Cherny. What this means is that the stadium will be LEED platinum certified — and 100% carbon-free from the day it opens, according to the NBA. It will also be a fully-electric building — running off batteries and solar power.

What To Expect From Aspiration

When The Financial Brand first spoke to Cherny in early 2019, there were a few things the CEO said he saw on the horizon for the company: A focus on financial wellness (and financial terms that make sense), a charter “down the road” and a credit product in one form or another.

Almost three years later, the goals have been partly met, and have also evolved.

Its expansion into the B2B sector and establishing a stronger relationship with businesses nationally is a new goal, for example. The bank also plans to go public in late 2022 through a SPAC (Interprivate III Financial Partners Inc.).

The Zero credit card accomplished the goal of offering a credit product, but down the road, Cherny says he would like to provide a larger array of funding alternatives.

“We’re going to look at everything — from all different kinds of lending to insurance to other ways in which we can really provide those very differentiated financial options for people,” he explains.

And a charter? “It’s not something that’s on our roadmap right now,” Cherny states. “In 2019, we became the first fintech to break off and create our own independent structure. We’re not tied to a third-party bank, we built our account around a cash management account.” Those accounts are licensed through FINRA, which Cherny says compliments Aspiration’s structure.