Many banks and credit unions haven't progressed nearly as much as they think. Even those who rely on fintech partnerships to change their digital stripes and inject innovation frequently overstate their commitment to such strategies.

Financial institutions have been talking about “digital transformation” for at least a decade, but on the whole they haven’t made nearly the progress hoped for — nor as much as many institutions’ managements think they’ve already made.

That’s one of the main conclusions of research by Cornerstone Advisors. The company’s report, “What’s Going On In Banking 2022,” summarizes things quite bluntly: “We can’t predict that digital transformation efforts will get reset in 2022 — but they need to. Banks and credit unions are deluding themselves into thinking they’re further along in their journey than they really are and that their efforts are having the impact they think they’re having.”

What’s worse: Beyond this embarrassing mismatch, banks and credit unions face a parallel problem, according to a separate Cornerstone study. Many fintech partnerships, increasingly part of how traditional financial institutions look to implement digital transformation, are not paying off as hoped.

In the report “The State of the Union in Bank-Fintech Partnerships,” Cornerstone observes: “Few financial institutions report that their partnership efforts have produced significant gains in loan volume or productivity, or in driving revenue from new products and services.”

What’s especially worrisome about this trend, according to Ron Shevlin, Chief Research Officer at Cornerstone, is that many banks and credit unions see fintech partnerships as their primary driver of fresh growth. A few years ago, he said during a webinar concerning the reports, many executives would have cited mergers and acquisitions as a key force for more revenue, but partnerships have supplanted that.

What started out a decade ago as a sharp rivalry between 'snarky' fintechs and 'complacent' banks has evolved 180 degrees.

Webinar speaker Eric Sprink, President and CEO at Coastal Community Bank, an active player in banking-as-a-service, says “I truly believe that fintechs have become the partners of banks.” When his Washington state bank launched into BaaS six years ago, he says, he saw fintechs as competitors.

“You can see fintechs chipping away at what had been historically bank-owned products and services,” said webinar speaker Steven Schnall, Founder and CEO of NYC’s Quontic Bank. “You have to embrace that and get on board or you will get disintermediated. This is here to stay.”

There’s a phrase that refers to partnerships where the bank partner does little beyond being the entrée and connection to the banking system: “dumb pipes.” It is almost spoken of with shame. Cornerstone believes that attitude is misguided.

“If you’re making good money being a dumb pipe, then shut up and take the money. Banks need to start looking at Banking as a Service as a new distribution channel.”

To borrow from the old adage, wishing doesn’t make it so — but we can fool ourselves through wishful thinking.

“It’s hard to believe that, of institutions that launched a digital transformation strategy in 2021, 11% are three-quarters done and another 3% are almost done,” it states. “That has to be the fastest ‘transformation’ in the history of mankind.”

These trends can be seen in the combined graphic below, taken from the study. The top chart shows institutions’ overall current ratings of their progress.

Especially interesting is the difference between those with the longest experience with digital transformation and the newer converts. There seems to be a tendency, even given their head start, for those institutions who started their efforts in 2018 or earlier to rate their progress more critically. Apparently, more experience in working towards transformation fosters a more-realistic perspective. 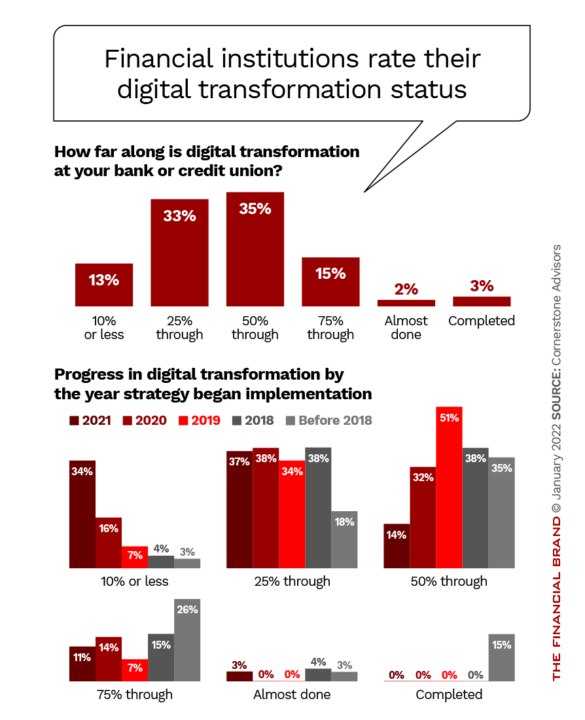 This pattern suggests that banks and credit unions have a choice. They must either become more realistic about where their efforts stand or they must pour on more energy and more resources in order to achieve the pace of change they aspire to.

Considering the investment of time, money and staff that some institutions have made towards digital transformation, the results achieved so far in terms of growth are not strong. The study looked at improvement of below 5% and above 5% and found the best traction in the loan and deposit areas. 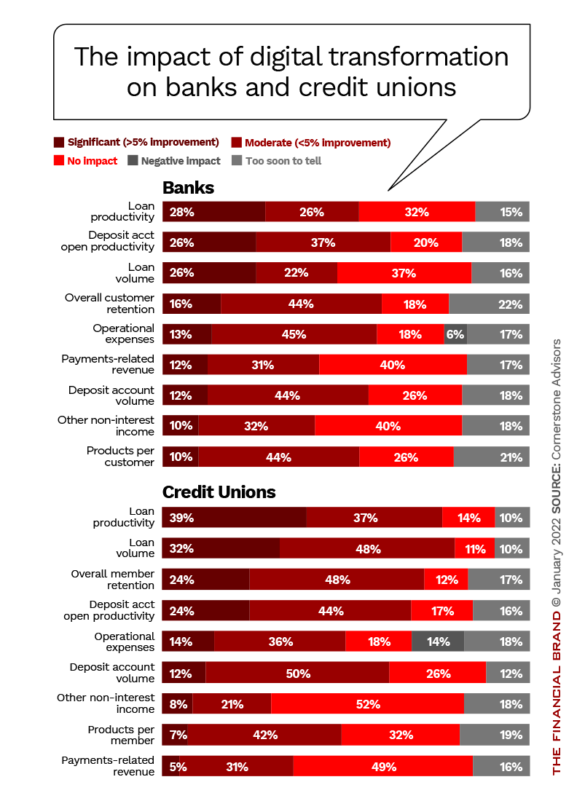 The leading gainers, overall, for credit unions were loan productivity and volume and member retention. Fewer banks reported significant improvements in most of the performance metrics, the report says.

Increasingly, institutions realize that digital transformation only happens when both internal and external efforts are aligned — everyone’s pulling their oars in the same direction. However, the study found that among both banks and credit unions, significant help towards digital transformation has not come from core system vendors. 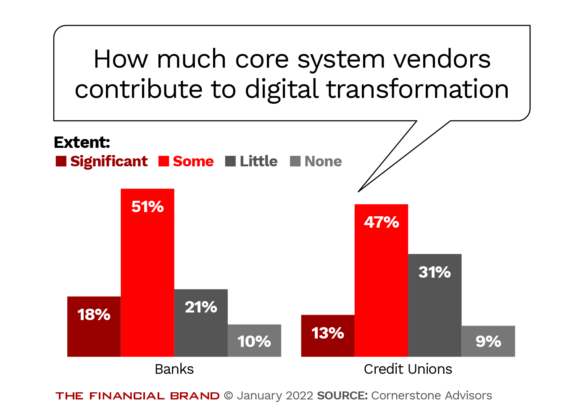 As a result, some banking executives are writing off the idea of getting much help from their core vendors and are looking to newcomers. Said one unhappy customer: “The future is not monolithic platforms that the Big 3 continue to try and shove down our throats. The shift towards the cloud and open APIs is inevitable.”

Perhaps not surprisingly, financial institutions report much greater contributions from their digital platform vendors, with 33% of banks and 58% of credit unions giving their firms credit for significant effort. A skeptical thought: If transformation is part of this vendor group’s stock in trade, why isn’t the “significant” rating higher still? 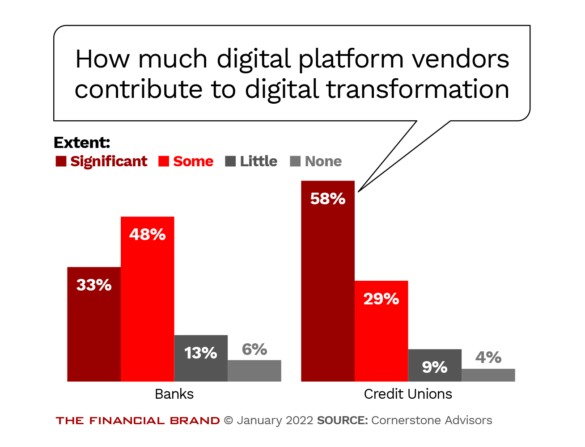 “Digital transformation is forcing a core system decision at many financial institutions,” according to Brad Smith, Partner at Cornerstone. “Double down on digital with our core vendor or go with a best-in-class digital platform?”

In fact, one of the must-dos suggested in the report is to replace legacy technology. That seven out of ten banks and three-quarters of credit unions don’t plan to replace the core systems was inexplicable, according to the report. The research indicates that very few institutions have implemented core integration or middleware that sits on top of existing cores.

For many mid-size banks and credit unions, fintech partnerships are becoming the primary form of innovation.

Nowadays these partnerships fall into three categories, according to a Federal Reserve hierarchy:

Shevlin said Chime was a good example of the latter.

“I’ve heard people pooh-poohing Chime as being nothing more than a front end. Big deal! I’m sure the banks that are supplying their services to Chime aren’t pooh-poohing the arrangement. It’s an incredible revenue source.”

A key problem with fintech partnerships is that many institutions have few or even no staffers dedicated to working with the partners. Nearly half of all surveyed admit this.

Among the institutions under $10 billion in assets that do dedicate some staff, it comes out to 2.5 full-time equivalents, on average. That figure is not sufficient, the report asserts, especially given that an overwhelming percentage of financial institutions look to fintech partnerships as a driver of growth.

The study also says that too many institutions invest in partnerships in anticipation of “home runs” — in the hopes of drawing millions of customers. Not a good strategy, the report concludes.

“What banks need is a decision-making and investing process that funds a lot of ‘singles” —products that will attract thousands (possibly tens of thousands) of customers,” the report states.