Due to digitization, growing consumer awareness, competitive forces and political pressure the days of $35 overdraft fees are fading for many financial institutions. As more banks and credit unions drop or reduce fees and provide alternatives to help consumers bridge short-term cash flow issues, they also need new revenues. Building trust through fee transparency and advice can not only make up the shortfall but put institutions in a better long-term position.

In a time of rising consumer awareness, increasing competition and political and regulatory scrutiny, overdraft charges are casting some financial institutions as villains, even if they complying with Reg E or other applicable regulations. A growing number of banks and credit unions are extending grace periods or offering short-term accommodations to bridge gaps in consumer liquidity.

As the industry slowly moves away from overdraft fees, banks and credit unions will have to seek new channels to replace the revenues.

The Problem and Pressure on Fees

While overdraft fees remain an essential revenue stream for many banking institutions, they have steadily declined in recent years, falling more than 15% from $37.1 billion in 2009 to $31.3 billion in 2020, according to Moebs Services.

Before digitization, dealing with overdrafts was labor intensive. “That used to be why people paid the overdraft fee,” observes Alan McIntyre, Accenture’s Senior Industry Director for Banking. “As things became more digitized over time, the justification for fees began to fall.”

Adding to the downward pressure on fees is growing consumer awareness of what’s going on.

Tough Act to Live Down:

In addition, these fees often impact the poor and financially disadvantaged. A survey by Morning Consult found that 52% of adults believe overdraft fees are an unfair penalty on underprivileged consumers.

“It has made it appear to a lot of customers that overdraft fees are unfair and unnecessary. That has cranked up the competitive pressures,” says McIntyre.

Even as many financial institutions are already dropping fees, changing policies or looking to new ways to deal with overdrafts, there’s growing chatter in Congress about limiting overdraft fees on debit transactions and adding more overdraft protection. The proposed Overdraft Protection Act, reintroduced in June 2021, would prevent institutions from charging a customer more than one overdraft fee per month. In addition, the proposed legislation would hold the charges to no more than six per year. The bill would also change the order in which institutions post transactions and require them to disclose overdraft fee limits.

Exchanging Fees for a Bit of Goodwill

Whether through competitive self-interest or fear of new regulations, many financial institutions are already looking for alternative ways to deal with overdrafts.

After Ally Bank temporarily suspended overdraft fees early in the pandemic to customer plaudits, it made the move permanent. Throughout 2021, additional institutions followed suit with alternative overdraft options. In April 2021, Frost Bank started a program that waived fees on overdrafts of $100 or less. 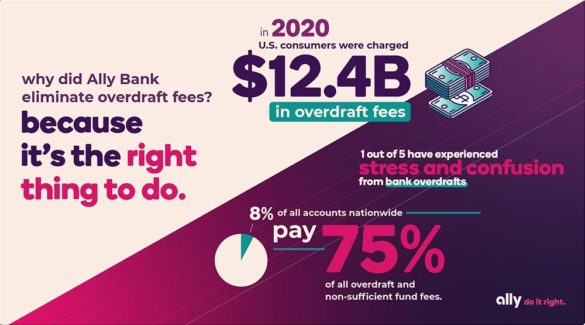 PNC rolled out a “Low Cash Mode” offering that helps its Virtual Wallet customers avoid overdraft fees. PNC gives customers the power to prioritize by determining whether certain debits are processed, while alerts offer 24 hours of extra time to address overdrafts before they are charged a fee. 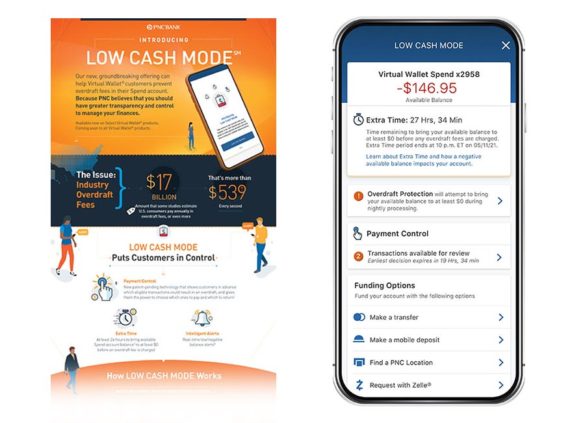 In September 2021, Regions Bank launched Regions Now Checking, a checking account with no overdraft fees in place of a $5 monthly fee. The bank also changed how checks were processed and enhanced alerts to notify customers of low balances.

Other institutions are offering short-term assistance to bridge the liquidity gap for consumers. For example, Bank of America’s Balance Assist instantly provides a credit line of up to $500 for a $5 fee with a three-month installment plan to pay it back. BofA has also added Balance Connect, which permits consumers and small businesses to designate up to five other BofA accounts as backups should their checking account be in danger of being overdrawn. These can include savings, checking and credit card accounts. Consumers can specify which accounts will be tapped first.

Neobanks and other fintechs have been leaders in this area. For example, Chime‘s SpotMe overdraft service also spots customers up to $200, which is deducted from their next paycheck.

Other players are discounting overdraft fees, in part to building numbers. The revamped Walmart Moneycard, offered in conjunction with Green Dot, for example, can be seen as both a market share move and an attempt to reap fee income in volume, according to an analysis by consultant Mike Moebs.

Some traditional institutions are also looking at what many call “early wage access” that lets consumers access their direct deposits faster.

For example, Varo’s early direct deposit offers deposits up to two days earlier. Neobanks have jumped on this strategy and traditional players are following suit. Even pharmacy chain Walgreens has joined this trend, with its Scarlet accounts.

McIntyre believes the sheer nature of digitization and competition will continue adding downward pressure on fees. As banks and credit unions find new ways to compete for and assist paycheck-to-paycheck consumers, standard overdraft practices and similar fees of the past will become antiquated.

“Overdraft service exists for a reason, and that’s to help customers smooth their cash flow. We’re seeing more innovation around different ways to do that,” McIntyre says.

As institutions rely less on overdraft fees, they’ll need to make up those revenue streams. Many who voluntarily led the charge away from fees believe it will pay off in the long run. While PNC’s Low Cash Mode is expected to save customers between $125 and $150 million in overdraft fees annually, the bank believes that future account growth will offset the loss in fees through “significant growth” in new and existing accounts, the bank stated in a press release.

While it takes time to pay off, such relationship-building can eventually offset the losses in fees, says McIntyre.

One way to gain trust, the firm suggests, is by helping consumers avoid overdrafts in the first place through automated account alerts, short-term loans and other options.

“If you build a trust relationship with your customers and are seen more as advisors,” says McIntyre, “the share of wallet increases and retention increases.”

The greatest opportunity, as the age of nuisance fees passes, is in what it calls the “Neglected Middle,” according to Accenture. This consists of U.S. adults who have a net worth between $10,000 and $100,000.

More than a third of U.S. bank customers say managing their money is difficult because they lack knowledge about finances or are confused by complex bank products. In addition, 48% of them say they would pay an extra fee for additional services from their bank, like personalized loans, automated savings and investment tools, and long-term financial planning.

“There are lots of different ways banks use the relationship with the customer to create fee income streams that are not necessarily charged to their account on a month-to-month basis,” says McIntyre. “One of the hallmarks of digital banks is that they become less dependent on fees and more dependent on interest income.”