Before spinning off its digital-only BankMobile unit, Customers absorbed crucial lessons about technology and tech management from the startup experience. New CEO Sam Sidhu is applying these as the bank builds its digital presence.

Now at $19.6 billion in assets, Customers Bank rolls up a 12-branch regional community banking operation in the Northeast, a growing national digital branch that serves both consumers and businesses, a business banking operation comprised of loan offices in a growing number of markets around the country, a bevy of business credit specialties and partnerships with fintechs to expand the bank’s consumer lending.

For more than half a decade, Customers Bank served as “mother ship” to what began as BankMobile and which was spun off in January 2021 through a special purpose acquisition company deal, to become BM Technologies, a nonbank fintech. BMTX, as the firm is frequently referred to now, introduced Customers Bank to high-tech capabilities and agile practices and gave the parent a tech reputation.

Has the unplugging of BMTX left a major hole in Customers? Not really, because Customers has been filling in the resulting staff skills gap with fresh talent, much of it hired away from industry leaders like Goldman Sachs and Mastercard.

“When we created BankMobile, we wrapped our own core with middleware before people even knew what that meant,” says Sam Sidhu, Vice Chairman, President and CEO at Customers, which is based near Philadelphia. “We had developed a sort of API-driven, cloud-based methodology of working and a comfort with doing business with third-party fintechs. That helped us learn to be agile.”

Sidhu, who became CEO in July 2020, is the son of Jay Sidhu, his predecessor as CEO, and brother to Luvleen Sidhu, who founded BankMobile and now runs BMTX independently. He explains that while the revenue generation capabilities and customer relationships of BankMobile departed with the spinoff, “we were left with the fintech DNA and culture that we have now been filling with new players. When the infrastructure design is in place, then the challenge is adding the new people. The FIS core, the data warehouse and the analytics were always on the Customers Bank side, as well.”

What was also in place was the overall organization that Jay Sidhu, a veteran banker, had begun building when he and investors took over a failing $250 million institution in 2010 to create Customers Bancorp.

Today the company is a much larger concern. It has evolved far beyond its branch-banking roots. This has in part been the result of intentional design and also of taking advantage of developments along the way. For example, the advent of the unprecedented Paycheck Protection Program and the company’s aggressive involvement with it — the bank originated about $9.5 billion of the special pandemic program loans — introduced Customers to many businesses that it now hopes to turn into long-term customers with deeper relationships. The PPP inspired the bank to develop a digital version of the Small Business Administration 7 (a) program, expected to go live in later 2021.

“What’s most interesting for us over the next five years is to differentiate ourselves as a bank that is operating like a fintech,” says Sam Sidhu in an interview with The Financial Brand. “Right now the majority of revenue and profitability comes from being a high-performing community bank, but a larger and larger portion of the bank’s operations and revenue will come through digital means.”

Building on the Bones of a ‘Branch-Light’ Institution

The bank’s system of 12 retail branches isn’t expected to grow any larger in number. While they remain a significant source of deposits — on average they account for about $1.2 billion in deposits apiece — Customers is relying on growth through its digital platforms to increasingly be the mainstay.

Sidhu says that Customers has been adding approximately 25,000 new consumer customers per quarter, chiefly through digital. Both search engine optimization and search engine marketing account for a healthy portion of that recruitment.

Overall, total deposits grew at Customers by 60% over the six quarters ending in mid-2021. While that partially reflects the overall growth in consumer deposits in the U.S., the bank’s intent is to keep pushing and expanding on the deposit front. Management believes the time of easy gathering of cheap deposits could end in the near future, hence the prioritization of the digital branch and related efforts like real-time payments. 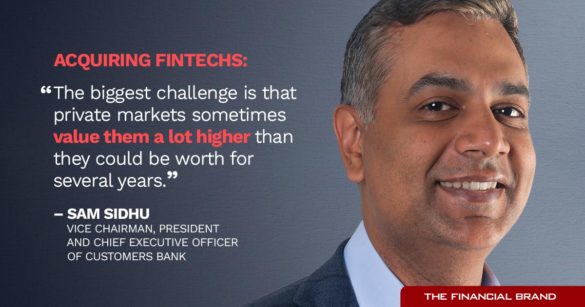 “It was really important to kick up that part of our franchise,” says Sidhu. A major rebrand and redesign of the bank’s digital look is coming in later 2021.

Increasingly both business and consumer customers will be given more and more self-service options on Customers’ digital channels. Sidhu says the bank has about 500,000 digital customers, including both businesses (about three-fifths) and consumers (about two-fifths). About 60% of those relationships came aboard during the pandemic period, in large part as a result of the bank’s PPP activities, according to Sidhu.

New business-banking teams have been set up in cities in Florida, Pennsylvania and Texas, and the bank’s Chicago and Washington, D.C., operations are being revamped. The bank is in discussions that could add more business locations over the latter part of 2021 and the first half of 2022.

Overall, Sidhu explains, the bank wants to create an approach that is increasingly omnichannel, serving people and businesses through both human and digital channels.

Applying Lessons in Agility to the Parent’s Structure

Sidhu says the bank has been reorganizing its technology side to flatten the hierarchy, to foster faster development, and to focus efforts more efficiently.

One move has been separating the “run the bank” aspects of IT from developmental activities. “And we have introduced product ownership and delivery groups that are more commonly used in the technology and consumer-facing world, as opposed to the banking world,” Sidhu explains. The bank has also beefed up staff digital marketing expertise, including a new chief data officer.

An important lesson learned in the course of building and improving BMTX when it was part of the bank concerned the build versus buy decision. Sidhu says it’s not all one way or the other.

First, “the way we think about technology is a little different than other banks do,” says Sidhu. “We think of technology as our product. Proprietary technology and patents are assets that we have that no one else will have.”

That said, Sidhu insists financial institutions can’t ignore the massive amount of breakthrough technologies that are being developed by outside companies. “You can partner with many of them in very cost-effective ways,” says Sidhu. Looking ahead, the bank plans to continue expanding its consumer lending partnership with Upstart, an artificial intelligence consumer lending operation that works with banks.

Ultimately two things matter most today: agility and the ability of the people hired for tech posts. “Those can create a lot of opportunities for you.”

To date, Customers Bancorp has chiefly relied on organic growth, rather than acquisitions. In fact, at points it has sat on growth, to build up capital and to take advantage of Durbin Amendment size advantages (which the bank has since passed).

But with more financial institutions appearing to put themselves on the block, in the search for size or simply to provide an exit plan for investors, opportunities for acquirers are coming on the radar.

However, Sidhu remains lukewarm on acquisitions of chartered institutions.

“M&A can always be helpful at the right price, with the right culture, for the right reasons,” he explains. “But we think about things like the fit of technology platforms.” Fitting a more traditional institution into the hybrid model of Customers would also likely result in a lot of wasted ingredients.

“Tuck-ins” of smaller players in some of the markets the bank is expanding into for business purposes is a possibility. A better opportunity would be a niche lending player with a business line that makes sense for Customers, Sidhu indicates.

However, a fintech would be the most attractive opportunity. Even there the bank would be cautious, says Sidhu.

“The biggest challenge is that private markets sometimes value fintechs a lot higher than they could be worth for several years,” says Sidhu. “So you either have to spot those types of platforms early, or you have to find them where there’s been some sort of dislocation.”

One deal that could have been tempting for Sidhu was the sale of OnDeck, the digital business lending operation that was acquired by Enova in late 2020.

At the time OnDeck was on the block, Sidhu says, “we had our plate full, otherwise that could have been a very interesting acquisition.”