Subscribe Now Get The Financial Brand's FREE Email Newsletter
Traditional banks may be tempted to breathe a sigh of relief with the demise of Google Plex, but forces threatening the industry are everywhere. Legacy financial institutions must move fast to improve the user experience and deliver solutions expected by consumers.

Last Friday, The Wall Street Journal reported that Google had decided to abandon plans to offer banking accounts through partner banks. Initially announced almost two years ago, the ‘Plex‘ checking and savings account would have had no monthly or overdraft fees and no minimum balance requirement, but would be powered by Google and benefit from the tech firm’s vast insight database.

The features most liked by younger consumers were person to person payments, automated spending insights and a tie between the ‘get gas’ and ‘get food’ buttons that would locate places to find those items. Smaller banking organizations were hoping that the Google Plex service would expand their geographic reach as well as improve their digital offerings.

CNBC quoted a Google spokesperson as saying, “Our work with our partners has made it extremely clear that there’s consumer demand for simple, seamless and secure digital payments for online and in-store transactions. We’re updating our approach to focus primarily on delivering digital enablement for banks and other financial services providers rather than us serving as the provider of these services.”

The challenge for big tech firms, such as Google, Amazon and others is that offering financial services directly to consumers could negatively impact their very lucrative cloud and data partnerships with a much broader array of banks and credit unions across the industry. According to Ron Shevlin, Research Director at Cornerstone Advisors, “The bigger reason why Google is backing off from the Plex offering is that the product lost its internal sponsors.” The architect of the Plex project, Caesar Sengupta, left Google in April to start a new banking venture.

Google Plex May Be Dead, But Digital-Only Banking Remains a Threat

While Google may not be a threat to open a digital bank, it can still be a threat in other ways as pointed out by Peter Wannemacher, principal analyst at Forrester, “Google’s ubiquity across different parts of people’s lives and its data – which includes only some of what banks have, but also a ton that banks don’t even realize they need – means it can still reshape how people make banking decisions. Even if it doesn’t want to compete with them head on – which makes strategic sense – Google will still be affecting a bank’s relevance and role in customers’ lives.”

Legacy bankers should also not delay efforts to improve their digital banking offerings. This is because, the growth of digital-only banking continues unabated, threatening the balance of power that traditional banks and credit unions have enjoyed for centuries. According to estimates by Insider Intelligence, digital-only bank account holders will grow from 29.8 million users this year to 53.7 million in 2025, with digital-only banks winning more than seven out of every ten accounts opened online this year. The number of digital-only accounts are more than the mobile banking users at both Bank of America and Citibank combined according to Insider Intelligence, with the growth resulting in penetration of close to 20% of the banking marketplace by 2025. 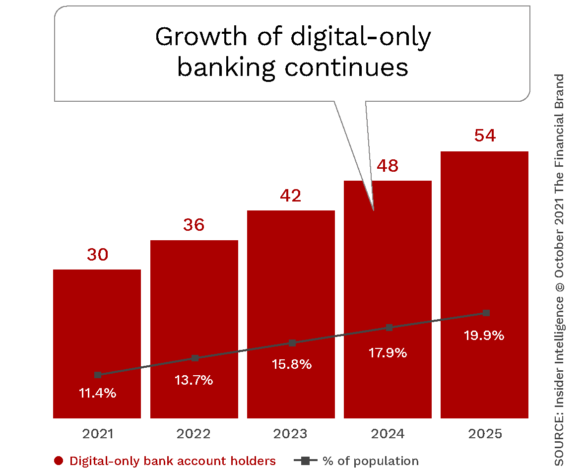 The reason for this growth is not surprising. Digital-only offerings appeal to consumers who have not been served well by traditional banking organizations in the past, due to fees, lengthy account opening processes, poor user experiences, etc. The increasing awareness of large digital-only banking organizations such as Chime, Varo and Current, as well as highly targeted offerings by smaller neobanks has also attracted a growing number of customers. 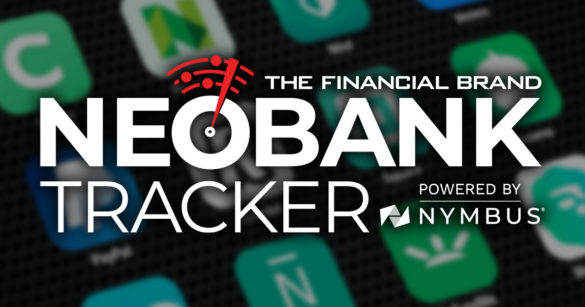 With branches closed for several months due to the pandemic, the appeal (and necessity) of digital-only banking increased far faster than was experienced before 2020. Even after branches reopened, the use of digital banking remained strong, with over three-quarters (75.4%) of U.S. adults using digital banking at least monthly in 2021, per Insider Intelligence. Monthly usage is expected to surpass 80% by 2025.

The appeal of digital-only banking has often been the lower cost. Because the cost to support a digital-only banking relationship is far less than a branch-based relationship, neobanks usually offer checking accounts with zero or low fees and sometimes combine this with higher rates on savings accounts. In addition, many offer much lower overdraft penalties and the ability to gain early access to paychecks. Traditional banks have been slow to respond.

Many of the neobanks have targeted underbanked consumers across a wide range of large and micro segments based on race, ethnicity, occupation and even sexual orientation. Surprisingly, not all age segments find digital-only banking equally appealing. While customers with the longest tenure at traditional banks aren’t moving to digital-only alternatives, the youngest age category are also not starting their banking at neobanks, most likely following their parents to the legacy family bank. 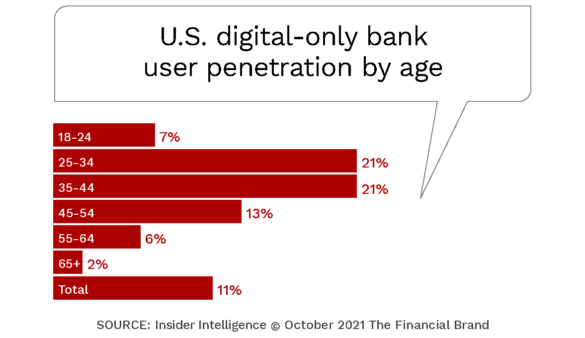 Even though Google has shuttered its ambition to offer checking accounts through traditional bank partnerships, legacy financial institutions can’t drag their feet with their own digital offerings. Big tech firms and neobanks continue to expand their offerings of banking services, including payment options, crypto trading, lending products and high interest savings accounts. Apple has launched their credit card in partnership with Goldman Sachs, PayPal and Square continue to expand services and numerous neobanks are offering more than just checking accounts. 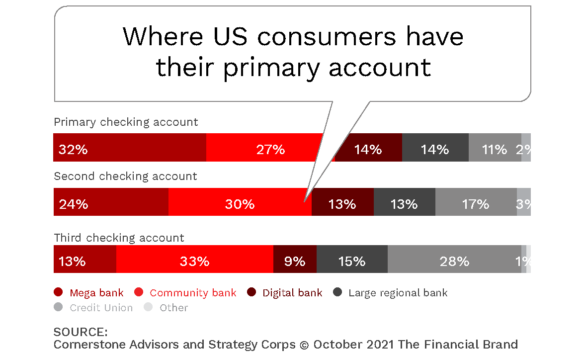 While only 11% of U.S. adults held their primary checking account at a digital bank in December 2020, according to research from Cornerstone Advisors on behalf of StrategyCorps, the increased offerings and the higher brand recognition could combine for a greater impact in the future.

The Need for Improved Digital Experiences

Traditional financial institutions have the majority of the products and services desired by consumers. They also have the scale that many neobanks lack. The biggest challenge is that the digital experiences are not on par with digital-only banks. Financial institutions are realizing that they need to improve back-office execution to enable efficiencies and customer experience improvements that provide value creation.

Banks and credit unions must also offer more personalized interactions and proactive recommendations with speed and simplicity. By delivering experiences that are not hampered by legacy processes, traditional financial institutions will be in a better position to compete with the best neobanks and big tech firms.