Vast Bank is a pioneer in this field today, but given the pace of financial change it might not be long before cryptocurrency services come to many financial institutions. Down the road Bitcoins and more might be collateral for loans — or even the currency loaned out.

Why would a small family-owned Oklahoma bank launch a special cryptocurrency banking app and checking account when some of the nation’s biggest players have shied away from any connection with these virtual currencies?

For most financial institutions under $1 billion in assets, this would be a nonstarter. But then Brad Scrivner has been working for several years to make Vast Bank, N.A., something beyond the ordinary local, commercial real estate dependent institution. As described in an earlier article on The Financial Brand, Scrivner launched a multi-year quest to make Vast Bank, with total assets of $785 million, a digital leader, including offering banking as a service to various fintechs.

2021 has been the Year of Cryptocurrency for Vast, with the bank introducing multiple services that led up to its new Crypto Banking service, introduced in August 2021.

Scrivner’s goal, in part, is diversifying the bank’s revenue stream. But why go with something as seemingly risky as cryptocurrencies?

He explains that the buildup of interest in crypto, especially in 2021, has convinced him that the trend has legs and will not only stick around, but grow. And then he points to the history of ATMs. Once they were offered by a handful of institutions, and now they have become a business in their own right, as well as a channel for banks and credit unions.

“ATMs became an expected part of banking today,” says Scrivner, “and I believe that crypto is going to go the same way. We’re setting it up as a feature, a facet of banking, for the future.”

Scrivner believes that the trust that people associate with their financial institutions is something the industry has going for it. He doesn’t worry about competition in crypto today because he thinks the public’s interest in it is growing deeper and wider, far beyond the industry’s current participation. He also sees blockchain technology as a key development for the future, and cryptocurrency represents a use case for the tech.

Taking a Bearing on Crypto:

Gemini, a cryptocurrency company that offers a crypto exchange, wallet services, crypto payments and more, estimates in its 2021 State of U.S. Crypto Report that approximately 14% of the U.S. population already owns cryptocurrency in some fashion — that’s 21.2 million American adults.

Building Up to Offering Crypto Accounts

Former Acting Comptroller of the Currency Brian Brooks was a big fan of cryptocurrency. He not only talked up the concept in speeches and interviews, but in his short time at the agency he oversaw approval of industry crypto efforts.

While this was going on, Scrivner says, Vast Bank was in the midst of bringing another fintech on board as a client and that company was interested in crypto. This convinced him that crypto was approaching a threshold and that the time had come to explore it seriously. He began talking with the OCC’s Office of Innovation staff about crypto ideas.

Along the way, Scrivner began talking to Invstr, a social investment app company. Partnering with a national bank would allow the firm to expand into cryptocurrencies without having to obtain state-by-state licensing, Scrivner pointed out. The firm and the bank launched a partnership enabling Invstr members to buy and sell Bitcoin, Bitcoin Cash, Ethereum and Litecoin. The bank’s roles are facilitating the arrangement with Coinbase, which provides high liquidity, and providing digital asset custody.

These moves gave Scrivner the confidence to launch the bank’s Crypto Banking service. The new app enables the buying and selling of cryptocurrencies directly with bank accounts, something the bank’s customers have expressed interest in.

The accounts give customers the ability to buy, sell and hold seven cryptocurrencies, including Bitcoin, Bitcoin Cash, Cardano (Ada), Ethereum (Ether), Litecoin, Orchid and Algorand. Additional crypto types could be added on a case-by-case basis.

Among the features the bank is promoting: 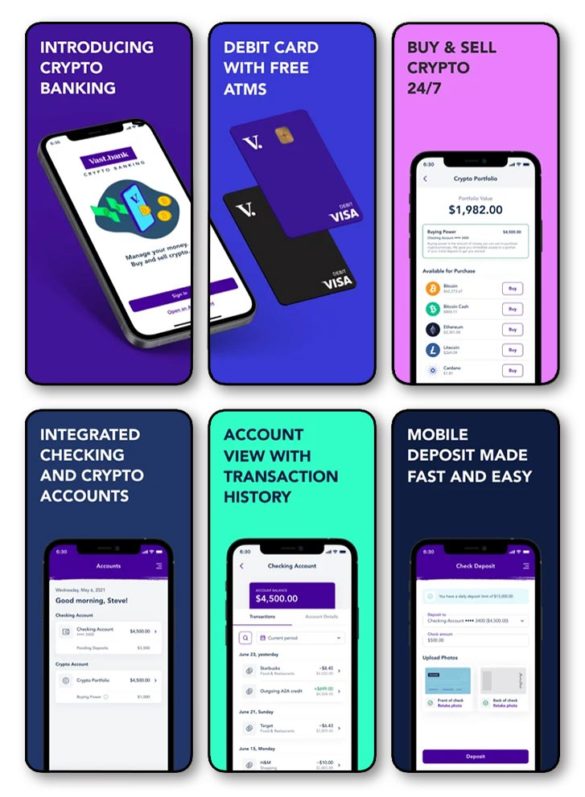 Scrivner says reception to the new product has been strong, including customers with extremely high net worths. He says interest has come from all 50 states and Puerto Rico.

Some of the interest, says Scrivner, may be speculation, people trying to make quick buck. “For others, there may be some ‘FOMO’ — fear of missing out.” He says there are some people who like the blockchain’s removal of intermediaries seen in traditional currencies.

But Scrivner thinks something else is also in play, though he says he doesn’t want to get into monetary policy debates.

And some folks, he says, are just “crypto curious.”

Read More: 7 Major Payment Trends that Will Shake Up Banking in the Year Ahead

How Does the Bank Make Money on Crypto Accounts?

The business model is an evolving one. Right now the chief source of income lies in the 1% transaction fees.

A potential future source of income would come from charging for “cold storage.” Unlike bank deposits, cryptocurrencies are portable and anonymous outside of the holder’s account, according to Investopedia. Thus, once stolen, they are unrecoverable.

“Most cryptocurrency wallets are digital, but hackers can sometimes gain access to these storage tools in spite of security measures designed to prevent theft,” says Investopedia. “Cold storage is a way of holding cryptocurrency tokens offline.”

Scrivner sees this as a good fit.

“We store value, deposits or whatever the case may be. We transfer value between accounts or between people. And then typically there’s lending,” says Scrivner.

Initially the role of crypto in lending would be as collateral, he adds. Further down the road, banks could explore lending crypto deposits directly, in some fashion.