Retirement looms as a nagging question for older generations, yet even the youngest consumers have already started thinking about saving up for the big moment. A JPMorgan study finds that people continued to contribute to retirement plans in 2020, but say they need more help, including more automation, from financial institutions.

The Covid-19 pandemic wreaked havoc on the economy and consumers alike. When it first hit, no one knew at the time how long lockdowns would last nor what the job market would look like when it was all said and done.

Despite the uncertainty, many people (surprisingly) didn’t stop contributing to their retirement accounts. According to a study released July 2021 by JPMorgan, four out of five employed consumers said they didn’t change their plan contributions at all and nine out of ten say they “tend to stay the course in volatile markets.”

“It was pleasing to see that while the Covid-19 pandemic disrupted financial markets, workplace trends and spending patterns, participants remained broadly resilient in sticking to their savings plan,” says Meghan Jacobson, Head of U.S. Insights at JPMorgan Asset Management.

Consumers Didn’t Give Up:

Even though Covid-19 threw a major wrench into the works of budgets and savings plans everywhere, 80% of people didn’t stop contributing to their retirement plan throughout 2020.

Just because people were contributing to their plans during the pandemic doesn’t mean they weren’t concerned. Retirement planning company Retirement Living said it spoke to its customers and found many felt significantly less prepared for retirement after the pandemic in comparison to before. 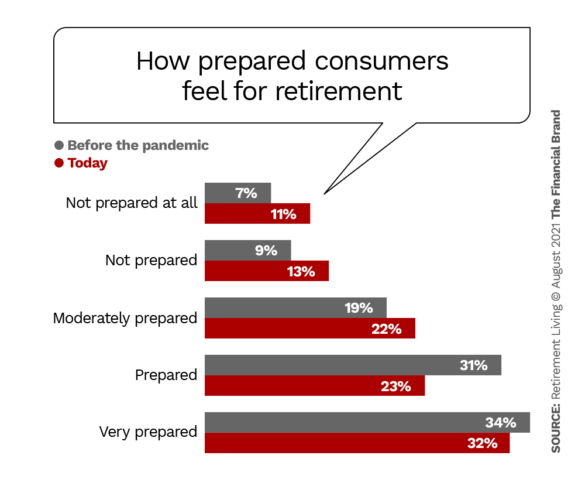 One result of feeling less prepared is that people want more automation built into their retirement plans. JPMorgan’s survey revealed that almost two thirds (62%) of respondents want an easy “do it for me” push button for retirement planning, up from 55% in 2016.

The populations JPMorgan reached out to for its study were comprised of 1,281 defined contribution plan participants, all required to be over the age of 18 and employed full-time at a for-profit organization. Additionally, they needed to have contributed to a 401(k) plan in the prior year.

Bank of America ran their own study in August 2021 and found that 25% of Hispanic Millennials were likely to contribute less or nothing at all to retirement accounts (compared to 15% of non-Hispanic Millennials) during the pandemic. While this research reflects a different sample base, the much lower number from the JPMorgan survey is striking.

Dig Deeper: How Banks Can Improve Banking for Hispanic Millennials

Where Do People Need More Help?

People would traditionally turn to an investment firm if they’re struggling to plan for retirement. Yet, Devon Delfino, an independent journalist writing for Lending Tree’s Magnify Money database, says that 42% of Americans think professional financial advisors are only for the wealthy.

Instead, they’re doing it on their own, or turning to non-professional sources. Three-fourths of people already manage their own finances, as found in a 2019 CNBC and Acorns study. And the Employee Benefit Research Institute found in March 2021 that 35% of people turn to friends or family for advice on retirement planning and an equal percentage conduct their own research. Another four of ten workers say they don’t know who to go to.

However, even banks and credit unions that don’t specialize in retirement advice can still help their customers plan for retirement by helping them establish retirement savings accounts — regardless of whether people’s employers are contributing to a 401(K).

Dig Deeper: What Consumers Really Want from Their Banking Providers

They Worry They Haven’t Saved Enough:

Even after putting aside some money, people still have concerns. JPMorgan’s study says three quarters of participants know they should be setting aside more for retirement (at least 10% of income).

When it comes to money, people will always be worried there’s not enough to go around. Covid-19 only exacerbated that. 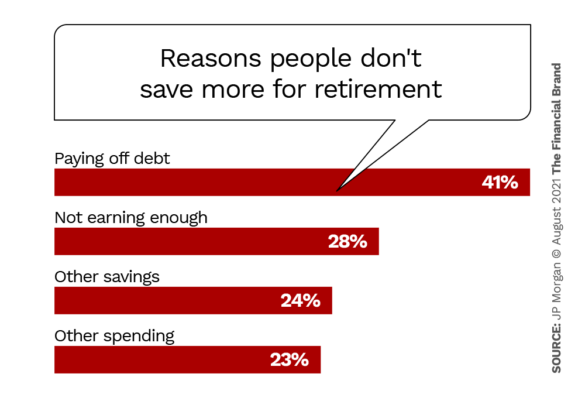 “The pandemic highlighted the need to be prepared for the unexpected, with emergency savings accounts prioritized by participants, particularly among younger individuals,” says Alexandra Nobile, a retirement insights expert at J.P. Morgan.

They Don’t Know When They’re Retiring:

Arguably, one of the best ways to help people start a retirement plan is to figure out when they want to retire. About a quarter of respondents (24%) say they plan to retire at 64 or younger while 57% say it’ll likely be at 65 or older. Regardless of whether or not these are realistic estimates, nearly a quarter (24%) say they have no clue what age to predict. 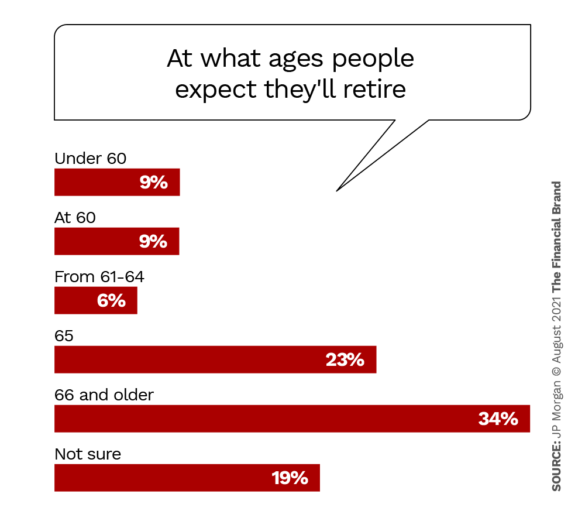 This is a pivotal objective to reach with customers as it will determine how much money they will need to set aside monthly. If they don’t know, however, banks and credit unions can at least help people establish a reasonable timeline (with room for emergency situations).

People Don’t Know How Much To Save:

Just like they don’t know when they should expect to retire, people also have very little to no idea of how much cash they should have in their retirement accounts. The vast majority of people worry they’re going to run out of money when they’re in retirement, according to JPMorgan estimates. Even amongst those who have established a retirement savings plan, most still aren’t confident in how much of a balance they’ll actually have when retirement rolls around.

It’s difficult too for people to estimate how much their employers will contribute to their retirement funds, even though three-quarters of people agree employers should have some or a great deal of responsibility in helping employees save, JPMorgan’s report states.

The best thing a financial institution can do, in this case, is to help people prepare for retirement, with or without the help of their employer. For example, banks and credit unions can establish a simple savings plan with customers, based on a given timeline, and give them pointers and milestones to mark along the way.

JPMorgan reports that people’s favorable and neutral views of automatic enrollment rose this past year, climbing to 89%. Additionally, of those already automatically enrolled in plans, 97% say they were satisfied, reflecting the “do it for me” button people say they want.

“The overarching theme of this year’s research is that participants want more help with investments, contributions, and post-retirement income,” JPMorgan’s Jacobson says. “Employers and advisors should feel empowered to offer features such as auto-enrollment and reenrollment in target date funds to place participants on a more secure retirement savings path.”

Long term, to address their concerns about not contributing enough, financial institutions can encourage their customers to enroll in automatic retirement contribution plans and can also check in with people occasionally to make sure the plan is still on track.

More than anything, Retirement Living’s Content Manager Jeff Smith tells The Financial Brand, banks and credit unions should prioritize being honest and transparent with people.

“Individuals are concerned about their futures and are searching for financial professionals they can trust who can help them create a diversified financial plan,” Smith adds.

People are already planning most of their financial lives on their own. Many of them often just want a little more help from their financial institutions, which can be as simple as setting them up with automatic contributions to a retirement savings plan.