The entire banking industry from mighty Chase on down is alarmed by the rising power of nonbank competitors. But the onslaught has also roused the industry, which has the muscle to regain lost ground fighting digital with digital, if it moves quickly.

Neobanks and fintechs breaking into banking have helped to stimulate banks and credit unions to innovate, forcing them to be quicker on their feet. These challengers have been more creative, and brand- and mission-focused, with a particular attraction to the next generations of consumers.

It’s been a bruising fight for traditional banking providers. The pandemic spurred a global adoption of the digital model, creating a bedrock of support for fintechs to “turn up the heat on incumbent banks,” according to a Capgemini report.

Banking leaders have become hyper-focused about fintechs and neobanks, and for good reason. Fintech funding is through the roof. U.K. investors alone having raised $5.7 billion in the first half of 2021, beating 2020’s record of $4.3 billion (for the entire year), according to Innovate Finance data.

But amid all the angst brought on by this digital onslaught some data has surfaced suggesting existing providers still have the upper hand. Case in point: Almost seven out of ten (68%) people say they would try out a digital-only banking product offered by their existing primary bank, according to Capgemini’s findings.

Maybe the pressure from the neobanks was exactly what traditional banking providers needed to gain a better understanding of their customers. And maybe they can finally seize the momentum, considering they have a well-established foundation and are familiarizing themselves with the technology they need to retain customers who might otherwise jilt them for the upstarts.

What Traditional Banks Need To Do

John Berry, CEO of the European Financial Management Association (EFMA), which partnered with Capgemini in producing the World Fintech Report, says there is really no time for financial institutions to wait and see what takes place with this digital banking revolution.

“Pandemic fallout has made the traditional retail banking environment even more demanding,” Berry said in the report. “For incumbents to remain relevant, now is the time to embed finance within customer lifestyle and embrace platform-based models — procrastination is no longer an option.”

In response, more and more bank digital-only subsidiaries are popping up around the United States. The most recent one was launched by Cambridge Savings Bank, called Ivy Bank, in mid-July 2021.

“Ivy was born out of our desire to meet customers where they are in this changing market environment,” said Wayne Patenaude, President and CEO of Cambridge Savings Bank, “and provides an opportunity for us to deliver a relationship-centric digital bank with the backing of our historic financial institution.”

For financial institutions looking for a roadmap, Capgemini lays out three different approaches they can take when designing a digital-only subsidiary: 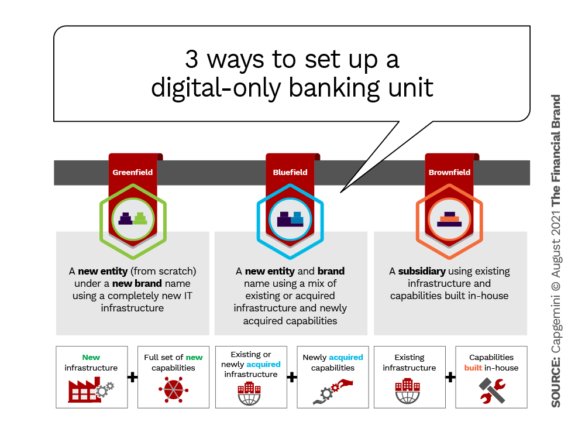 Greenfield
The greenfield method is growing more popular among banking executives who are intrigued by fintechs and existing technology programs. Using this technique, banking providers looking to launch a digital bank will invest in new infrastructure with a new name and branding image, built with brand new features which exist separately from the original bank.

Brownfield
Not to be confused with environmental brownfields — properties poisoned by hazardous waste — Capgemini says this approach resonates strongly with banking providers globally, but isn’t for the technologically faint of heart. It implies that a bank can incubate a digital bank completely in-house and “spin it off into the market as a separate entity,” the report reads. Most of the time, banks taking this approach will use their existing infrastructure instead of enlisting fintechs or other outside help.

Bluefield
The Bluefield technique is a mix of the two above as banks can build an independent digital-only banking entity that still incorporates infrastructure from the parent bank.

Capgemini’s report notes “digitally mature banks with unproven digital product innovation skills select this route,” because they can incorporate what they already know with the technological features their customers want.

“Fintech-inspired digital journeys need to become crucial strategic paths for banks across the board. However, players need to be sharp and specific as they move,” Bose maintains. “Players capable of achieving long-term growth and profitability today will be tomorrow’s fintech-era success stories.”

The Features of Winning Digital Subsidiaries

Ivy Bank wasn’t the first digital-only banking subsidiary to hit the streets. It succeeds Goldman Sachs’ tour de force with Marcus, along with ING, which came out with its own neobank Yolt in the U.K., among many others including BankMD, a digital unit of Texas-based Transpecos Bank, and KeyBank’s Laurel Road for Doctors digital brand. Not every digital spinoff has succeeded, notably the short-lived Finn mobile-only bank from Chase.

But, what are the characteristics these banks built into their digital divisions that can compete with the industry’s neobanks? Look first at MidFirst Bank, which has now launched two of its own neobanks: Monifi and Vio Bank, according to The Financial Brand’s Neobank Tracker.

Monifi, for one, advertises itself as a fee-free banking provider which helps its customers to budget and save. Its high interest rate competes with several of the industry’s largest players, including CIBC and AmEx. Monifi users can also set up different budgetary accounts so they can save for different goals.

Monifi also helps consumers figure out how much they’re spending on different purchases, and they can ask the app questions like “What’s my favorite restaurant?” or “How much did I spend on coffee last year?”

Vio Bank, on the other hand, centers its strategy on CDs and Money Market Accounts.

Marcus has many similar features, but with a few added perks. Building on Goldman Sach’s existing investing strategies and infrastructure — an example of the bluefield method — Marcus allows customers to open high-yield savings accounts CDs, take out personal loans for anywhere from $3,500 and $40,000 and automate their investing portfolios.

On the other hand, ING’s Yolt — with a tagline “Unthink Money” — takes a more intuitive approach, offering pre-paid deposit accounts (by asking users to connect a bank account or several) and debit cards. Customers can also utilize the “jar spending” tool, which — like Monifi — helps people generate various savings accounts.

What stands out about the Yolt app is its built-in savings calculator, which helps customers quickly figure out how much they need to save for a vacation, wedding or dream car.

Learn More: For Most Banks, the ‘Do It All’ Days Are Over: Here Are Their Options

What They’re Up Against

All these (and many more) innovations demonstrate that the banking industry has awakened to the challenge. But these ventures will need the full support and backing of their parent organizations to push back against the headwinds of fintech/neobank competition, which has been building momentum for a decade now.

Most of the new competitors including Chime, Dave, Revolut, and Affirm succeed because they have partner banks enabling them to provide deposit accounts, debit cards and sometimes loans. Celtic Bank, Cross River Bank, The Bancorp Bank and Green Dot Bank are among the significant institutions in this role.

Keep in mind, however, that the fintechs and neobanks of the world are far from the only new competitors traditional institutions have to worry about.

PayPal (with its Venmo subsidiary), Square, with its Square Banking unit now operational, Apple with its Apple Card in partnership with Goldman Sachs, and Walmart actively pursuing banking services through Green Dot and other means — all pose enormous challenges.