Zelle has become more than the person-to-person payment service it set out to be when it launched in 2016. In fact, Albert Ko, CEO of parent Early Warning, says he believes that Zelle has evolved into “digital cash.”

Ko notes that the bank-owned company now processes transactions for small business and handles disbursements for companies, government entities and nonprofits, which is far beyond handling payments to babysitters and facilitating the splitting of dinner tabs. To Ko, that growing ubiquity of the Zelle platform implies an increasing resemblance to the acceptability of actual cash.

“Zelle was born out of the notion that P2P payments were rising across various media and that financial institutions should get in on it, because P2P drives a high degree of customer engagement and retention,” says Ko, who came to Early Warning in 2019 after a long stint at Intuit. “I think of ‘digital cash’ as the destination in this business and P2P as a chapter in the journey leading to that destination.”

Zelle’s role as “digital cash” can be seen in PNC’s new “Low Cash Mode” service. The feature gives account holders several options for addressing a shortfall in funds that is about to trigger an overdraft. One is to reach out to friends and family for help via Zelle.

A key element of Zelle’s origin was the intent to create a bank-owned option for making P2P payments. But Ko says Zelle and its competitors, such as Venmo, PayPal (which owns Venmo), Square’s Cash App and others are all evolving as more people and businesses seek faster digital payments. 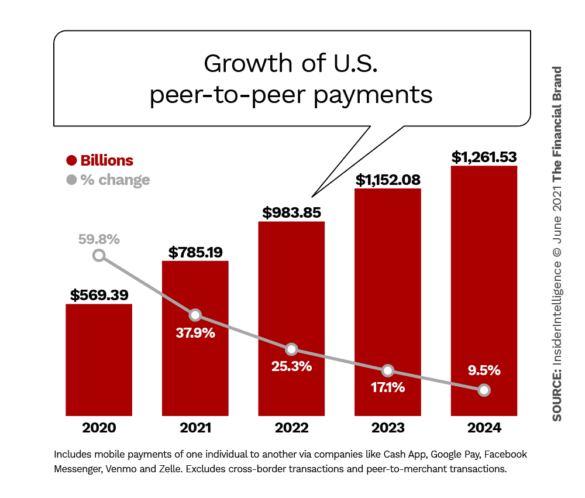 There’s a wide swath of payments that Ko says people want to handle digitally, even now that most of America has reopened in the wake of the pandemic. The appeal accelerates as people continue to use P2P services. Zelle signed up its 1,000th participating financial institution, a credit union, in the first half of 2021 and Ko believes the company will be signing up its 2,000th institution much faster than it took to reach the first milestone. Each institution adds a multiplier effect.

Consumers can use Zelle either through their bank or credit union mobile apps or through Zelle’s own app. Payments can be made to anyone with a mobile phone number or an email address. Ko says this helps build the “network effect” that stimulates volume.

“You’ve got virality built into the product, because for every sender there’s a receiver and every time a receiver successfully receives money, they’re more likely to send payments themselves, and then it’s ‘rinse and repeat’.”

Ko says that Zelle expects to move over half a trillion dollars in 2021 across about two billion transactions. That means the average transaction is about $250, which, he points out, makes clear that there has been significant growth in small business use of Zelle because $250 is higher than typical P2P transactions.

While small business, still offered by a limited group of financial institutions, remains a single digit percentage portion of the whole, says Ko, he adds that this area is growing at more than twice the rate of Zelle overall. The group of institutions providing this service accounts for a significant percentage of potential small business users.

Disbursements — payments by companies and other entities to individuals — is also growing, at about the rate seen by Zelle overall. “It’s growing in areas where there is high friction,” Ko explains. ” Think of medical insurance reimbursement; think of government payments accomplished by paper check now that could be handled digitally.”

“Zelle overall is in the third or fourth inning,” says Ko. “And small business and disbursement services are only in, maybe, inning two.”

How Marketing Works in the Zelle Network

Early Warning maintains three developmental labs in the U.S. to engineer improvements in Zelle as well as other services the company provides. In the case of Zelle, Ko says, the research of the seven owner banks influences what goes into new iterations of Zelle services.

“We get their input and very often the last mile of development is integrating the offerings that we make with enhancements from them,” says Ko. He says priorities include improving ways to pay bills with Zelle. “There are still very big pain points there,” he explains. In later 2021 Zelle plans to add more payment capabilities provided via QR codes. 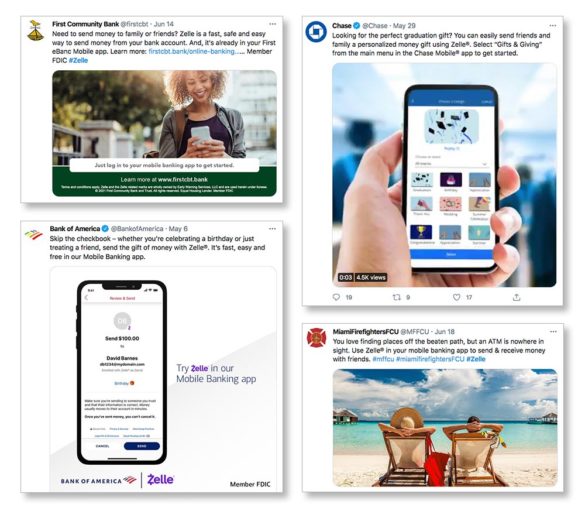 Marketing of Zelle is a blend between efforts by Early Warning itself and those by the 1,000+ institutions that directly offer Zelle. Using banks and credit unions as the service’s distribution network provides an opportunity that payment services outside of the banking system lack. Digital marketing is effective, as well as formats such as ATM screens that suggest that next time the consumer could just pay via Zelle, instead of having to get and then use cash.

One of the wrinkles on the small business front about Zelle is that while it is competing with the likes of Intuit, Square and other players, it doesn’t need to build ecosystems like these competitors do.

A Leg Up on Newcomers:

Improvements remain to be made in what Zelle provides for this market, however. Specific functions, such as the size of memo fields for payments and the use of invoice numbers, could stand improvement, says Ko. Such adjustments would change how transactions show up in small firms’ bank accounts and how well they integrate into the accounting system used by each small business.

In regard to real time payments, more institutions will be adding this to their Zelle efforts in the years ahead, according to Ko. A major question mark at present is how Zelle will adapt as the Federal Reserve implements its FedNow project.

Do Challenger Banks Get to Use Zelle?

Early Warning and Zelle specifically are industry consortia, rather than freestanding firms, and Ko acknowledges that in banking history the evolution of cooperative ventures has been all over the lot. Some stay that way a long time, others transform into something else.

“We don’t have any immediate plans to change our model — we think it’s a winning model,” says Ko. For the foreseeable future he sees common efforts through his organization as the way to go.

One twist is the growing population of neobanks. Those that actually have bank charters can join Zelle and provides its services to customers.

On the other hand, Ko says that Zelle’s current operating rules don’t allow it to permit organizations accessing the banking system via banking as a service to offer its programs.

For the time being, says Ko, “we want to be sure that we stay true to where our focus is, which is helping the banking industry.” Qualifying institutions are free to use Zelle to compete however they like, Ko notes.

“But it’s for the industry,” he says. “Zelle is an industry solution, and at least for the time being, we intend to keep it that way.”