Subscribe Now Get The Financial Brand Newsletter for FREE - Sign Up Now
Financial institutions feel pressured to keep up with their technology-based competitors as consumers show a growing willingness to switch providers with a better digital banking platform.
Subscribe to The Financial Brand via email for FREE!

The tension is becoming palpable in the banking industry: There is a growing cadre of new competitors to traditional providers and consumers seem to love them. The newcomers keep to the times and listen closely to what people have been asking for — socially-conscious digital banking that automates what they’ve been doing manually for decades.

Just look at what consumers are saying. An estimated three out of every ten people say they would up and leave their existing banking providers if they found a better mobile banking experience elsewhere, according to a survey, conducted by AdvantEdge Digital, a unit of CUNA Mutual Group.

The punches keep coming — change is not happening five to ten years down the line. It’s happening now, or will be very soon. The number of people who say they plan to switch their primary financial institution entirely in the next one to two years skyrocketed from “an annually consistent 12% to 22%,” according to the survey.

That number is getting underneath the skin of banks and credit unions. The AdvantEdge survey also revealed that, of the 141 financial institutions surveyed, over half said they felt somewhat — or very — far behind their competitors as they race to win the digital race. 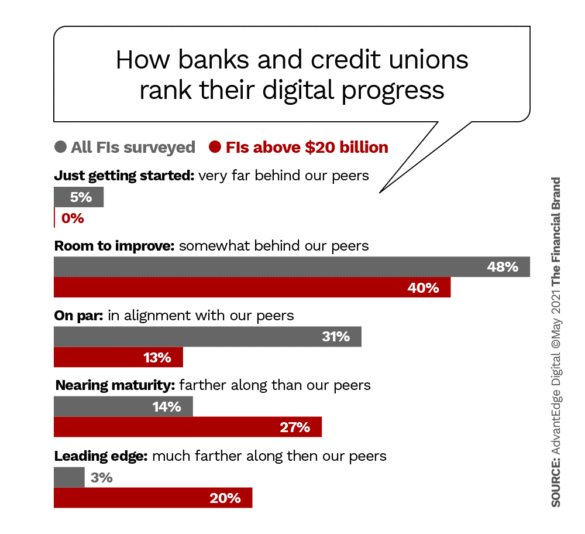 Cornerstone Advisors tracks what banks and credit unions consider the biggest threat to their foothold in the financial services industry. They found in their 2021 What’s Going On in Banking report that traditional banking providers now see challenger banks and neobanks as double the threat from the year before (up from 14% to 28%). Additionally, fintechs — like PayPal and Credit Karma — likewise bumped up their legitimacy as a threat in the eyes of traditional financial institutions from 29% to 36%. 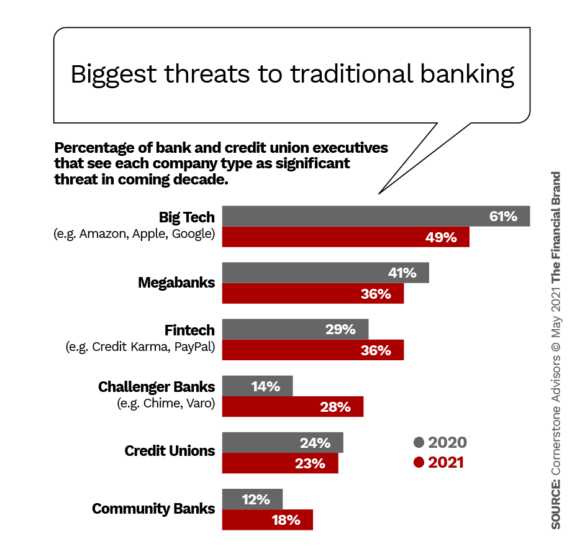 The Revolution Is Now

The fintech revolution arguably had its roots in 1965 when Gordon Moore hypothesized that the number of transistors in a dense integrated circuit at the optimal price and performance will double every two years.

While it sounds complex, Moore’s Law is actually a very simple theory: Mankind will develop digital technology at double the pace it did two years before. It has long applied to computers, but now analysts are seeing the relevance of Moore’s Law in finance.

Many people associate the current wave of fintech and neobank growth to the Covid-19 pandemic. And that clearly has accelerated the pace. However, it was really consumer expectations that shifted the name of the game well before the pandemic. To the point that now one out of every two people depend on their primary financial institution’s website or mobile app to bank — using one or the other at least once a week — compared to 32% two years ago, according to CUNA Mutual.

A hefty chunk of all banking consumers prefer an all-digital experience, that’s clear. J.D. Power pulled out data in a 2021 report showing nearly half of people (46%) banked digital-only in all of 2020 — zero branch visits in the prior three months.

Looking forward, banks and credit unions should now be thinking of not only damage control, but also retention strategies to keep consumers coming back to their digital platforms.

If data from your financial institution is indicating digital engagement isn’t growing year over year or is actually falling, dig deeper. It may be that consumers are looking to other platforms.