The merger of SunTrust Banks and BB&T to make the nation’s sixth-largest bank in the U.S. in 2019 was positively received by both regulators and investors. After a year of modest M&A activity during the pandemic, a new surge in deals has emerged, especially by regional banks. But is scale enough to change the fortunes of these banks?

In a competitive environment that favors organizations that are the furthest along in their digital transformation journey, many organizations are looking to increase market share and decrease costs through mergers. The latest S&P Global Market Intelligence Bank M&A Tracker noted that the number of deal announcements in 2021 totaled 53 year-to-date, compared to 43 during the same period in 2020.

In April alone, there were 19 announced deals in the U.S., the most deals in a month since January 2020 … before the deal boom was delayed by the pandemic. And most of these deals were not small. In fact, the value of deals so far in 2021 equals $24.83 billion, compared to $6.53 billion during the same period in 2020. 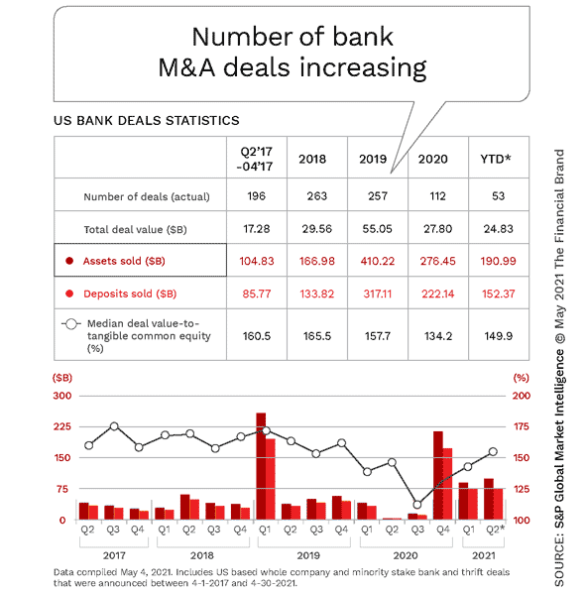 Illustrating the shift in size of deal in 2021, eight transactions had a value of at least $500 million, compared to only six deals of this size in all of 2020 and 12 in 2019. It is clear that many banks are seeking bigger deals, trying to get to scale as fast as possible and at a time when the markets are favorable. 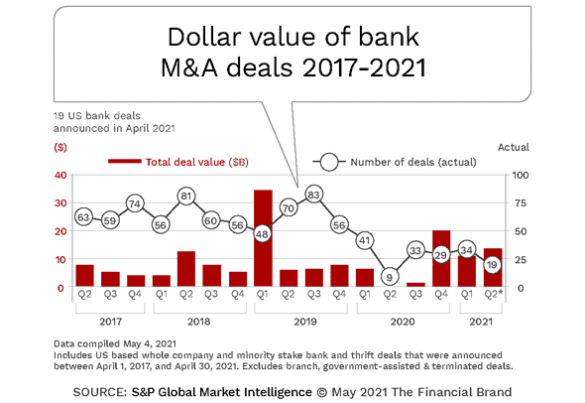 Some of the largest deals to make headline since late in 2020 include:

Obviously, none of these deals will result in an organization with the scale of the four largest U.S. banks – JPMorgan Chase, Bank of America, Citigroup or Wells Fargo. But these mega-organizations can’t acquire any more banks due to regulatory constraints.

There are a number of reasons given by the acquiring organizations for the mergers that have been made. Some are seeking a broader footprint; some are hoping to consolidate within an overlapping footprint. All discuss the potential for significant cost savings, and many mention that the savings from the consolidations will be used to modernize current infrastructure – making the larger organization more future-ready.

Oh, and there is the higher stock valuation that has resulted from most recent mergers. It is clear that increased regulatory burdens and the need to adopt new and better technology are pushing smaller banks to merge. But, does the consumer benefit from these combinations?

Few acquiring firms directly mention any customer experience benefits that will result from the mergers. And, if the past is any indicator for the future, critics believe that the reduction of roughly 10,000 banks in the past 30+ years has led to higher fees, less access to banking services, and more risk.

“The Wall Street megabanks are so large and powerful that banks across the country feel pressured to get bigger and riskier,” said Senate Banking Chair Sherrod Brown from Ohio. “Deregulation has left us with Wall Street banks that are too big and that take too many risks.”

Many mid-asset banks are hoping that cost savings achieved as a result of a merger can be deployed towards modernizing legacy infrastructure and improving data and analytics maturity. Without this increased investment, many banks believe they will be at a significant competitive disadvantage compared to the biggest banks, the more agile fintech firms, and tech giants that are encroaching on traditional revenue strongholds.

If a merged financial institution can’t operate under a single brand for over 18 months, how quickly can they transform their digital customer experience?.

As consumers and businesses are looking for financial institution partners that can deliver experiences similar to Amazon, Apple, Netflix and Google, speed is of the essence for mid-asset banks and credit unions caught playing catch-up. It is a decision between being a perceived as a digital transformation leader or finding a potential partner who is.

Modernization is Not Enough

Unfortunately, investment in new technology does not change the underlying problem with most mid-size banks. The Digital Banking Report has done significant research on post-pandemic banking trends, and has found that the biggest challenge for most mid-size financial institutions is not legacy technology, it is legacy leadership.

In other words, if the leadership of the larger, consolidated organization has not embraced all of the elements requisite of a digital organization, then the new organization may not be better … it may just be bigger. To veteran U.S. bankers, this may feel similar to what occurred with the Resolution Trust Corp. (RTC) in 1989, when the government liquidated and combined assets of failed savings and loans, making larger organizations that ultimately failed as well.

Without a digital mindset and vision, many C-level executives could best serve their organizations by resigning their positions.

Outside the banking industry, there are a multitude of instances where mergers of similar large organizations failed to serve either shareholders or customers better despite increased efficiencies. For instance, when United Airlines acquired Continental, neither leadership team understood what the consumer wanted in an airline. In addition, the culture and morale of United stunk, impacting everything from the maintenance of aircraft to customer service. The result was an organization with legacy leadership that resulted in increased losses and terrible satisfaction scores.

Organizations Must Look Beyond Scale

There is little arguing that in the age of digital banking transformation, modern technology, and costly compliance and cybersecurity, regional banks need to be big enough to take advantage of the scale that platforms and networks can reach. When your biggest competition spends multitudes more on technology than your bank makes in a year (or has in assets), the options are few.

But the biggest need is leadership, vision and culture that embraces change, is willing to take risks and are ready to transform their organizations into something entirely different than they have been since their existence. There may still be room for community banks that serve the needs of local marketplaces, but even these organizations need to partner or merge with organizations that can support digital modernization.

There will be an increased contraction in the number of banks in existence due to the costs of doing business, and the changed behaviors that accelerated as a result of the pandemic. The question will be how organizations will react to the marketplace realities that demand digital and vision transformation?