Banks and credit unions alike recognize the power of a digital banking strategy. But no one can do it alone. Traditional institutions and fintechs need each other to stay relevant. Increasingly they'll rely on a 'network of partnerships.'

Few recent banking trends have been as well documented as the accelerated shift to digital. Accenture Research has found that the percentage of consumers who say they use mobile banking at least weekly rose from 32% in 2018 to 50% in mid-2020, while in-branch transactions over the same period in the U.S. dropped roughly 40%.

Deloitte writes, “It is now abundantly clear that COVID-19 has acted as a catalyst for digitization.”

These findings parallel the consumer data gathered in the Ultimate Guide to the Top 2021 Bank Challenges by MX. Nearly all of the 1,000 random U.S. consumers we surveyed for the guide say they’re visiting their bank or credit union branch less often and using mobile banking more often than they did before the pandemic. 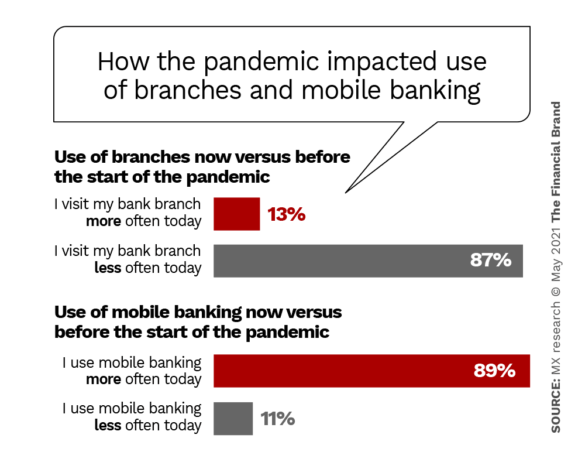 In addition, 87% say they have an account with a digital-only banking service, with 81% saying they’re more likely to use such services in the future. 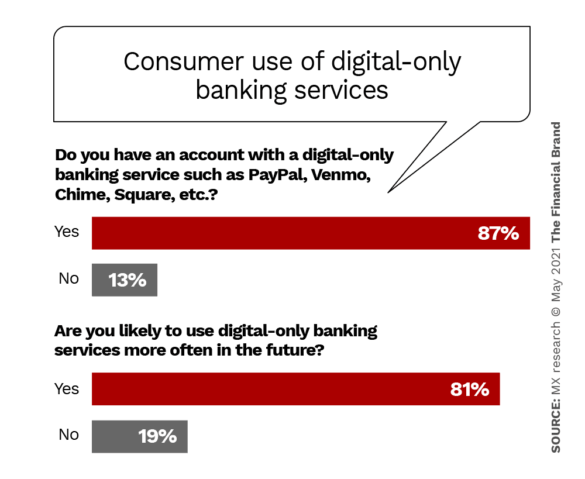 What’s more, in another recent survey, we found that 68% of consumers would like their banking experience to be similar to the experience they have with Netflix, Amazon, and other tech companies that understand their needs and offer recommendations based on their information. In other words, consumers want from their banking providers what big tech companies have been offering for years — personalized, tailored recommendations and services via their digital devices.

Fortunately, new and innovative technologies available to financial institutions and fintechs alike make it easier to address changing consumer behaviors. However, even though the solutions are readily available it might not be a quick rip and replace scenario. Rather banking providers and fintechs will have to work together to create digital-first money experiences.

The Future of Banking Is Digital

So, what’s the best way for financial institutions and fintech companies to move forward? In the past, the conversation often fixated on building versus buying. The problem with this is that no company can build every part of the journey from scratch — and it often doesn’t make sense to do it that way.

There are a lot of companies that specialize in certain areas, trying to compete against them by building it all internally is time consuming, costly, and slows down speed to market. On the other hand, no company wants to only buy out-of-the-box solutions that look just like what everyone else offers. In many cases, if you specialize in a certain area, it could make sense to build it on your own and outsource the rest.

The best way forward is to move beyond building versus buying to instead think of banking as a network of partnerships. It’s a strategy outlined by Jane Fraser, CEO of Citi and former head Global Consumer Banking for the bank, who says that she’s focused on creating “a light branch footprint, seamless digital capabilities, and a network of partners that expand our reach to hundreds of millions of customers.”

Forrester echoes this strategy when they write that “technology decision makers must abandon the traditional ‘buy versus build’ mentality, and instead adopt a ‘buy, build, extend, and assemble’ approach to creating a banking development platform that takes full advantage of the benefits of commercial components where possible.” Another way to think of the “buy, build, extend, and assemble” model is, as Fraser says, “a network of partnerships.”

Although it’s clear that the future of banking is digital, financial institutions and fintechs can’t go at it alone. What we’ll likely start to see is a merging of the two. Fintechs will not be able to scale and just remain fintechs.

Similarly, banks and credit unions that want to survive and stay relevant in today’s digital world, will not look like what we’ve traditionally known as banking providers. When it comes down to it, we’ve already seen a lot of big tech companies delve into banking — from Apple to Amazon and many more.

For fintechs and financial institutions to be successful in the digital world, they’ll have to work together. The right partnerships can offer flexibility, higher connectivity, and speed to market. With this framework, banking providers and fintechs can innovate in weeks, not years — and do it on their terms.