The digitalization of the payments industry accelerated as a result of COVID-19, as use of new payment alternatives soared. One of these, "BNPL," represents a significant challenge to established credit and debit card purchase patterns. Already highly popular with younger consumers, its growth potential is seen as huge.

The way people pay shifted in an instant with the onset of the pandemic, as consumers and businesses reduced reliance on cash and checks and increased acceptance of digital alternatives. While cards are still king for in-store transactions, various mobile options are seeing a surge in usage for both in-person and e-commerce payments. The fast acceptance of digital P2P options like Venmo, PayPal, Square and Zelle could easily be a foreshadowing of changes we will see in other areas, as consumers seek faster and easier ways to transfer funds and make purchases.

The collision of these rapid changes are causing both a consolidation and diversification in the payments marketplace. New players are entering the ecosystem, while traditional financial institutions and big tech players also battle for market share and the consumer’s mindset.

Rather than trying to dissect the entire payments ecosystem, it is important to understand the impact of one of the most recent phenomenons … the Buy Now, Pay Later (BNPL) marketplace, and the impact on key stakeholders. From a better understanding of the appeal and market for BNPL, to the providers and growth prospects, this analysis will provide guidance as to the risk and opportunities with this new payment alternative.

With the onset of the pandemic, consumers, merchants and payments providers needed to quickly change the way they transacted and supported the transfer of funds. As health concerns increased almost overnight, the flight to digital alternatives was immediate and, in most cases, everlasting. Over the past year, the use of cash and checks dropped as concern about the spread of the virus pushed consumers and merchants to digital alternatives. In addition, debit and payment cards saw a significant increase.

As part of this digital evolution, new payment alternatives increased as well, especially the potential to defer payments at the point of sale (POS). The Buy Now, Pay Later (BNPL) option was intriguing to consumers and merchants interested in some form of normalcy during a very abnormal time. BNPL option provide payment flexibility, helping consumers buy things when income may have been unstable and when merchants were looking to keep businesses open.

BNPL services lets a consumer shop for products and services they want and pay them off with interest-free installments. If the consumer makes the payments on time, there are no fees. Since the consumer gets approved on the spot, they can get a product immediately that they may not have been able to afford otherwise. BNPL providers may partner with the store where the product is offered or the option may be offered directly from the provider as is done with PayPal.

Similar to a traditional layaway program, the repayment period for most BNPL alternatives is relatively short, with the number of payment installments being minimal (4-12). While most of the BNPL programs are offered at the point of sale, competitive alternatives are now being offered by some credit card providers retroactively after the original transaction has taken place.

BNPL options are often used by younger consumers looking for a credit card alternative. In some cases, they only want to use the BNPL option for a single purchase (as opposed to having an open line of credit). For some with less credit history, the appeal is that there may not be a need for a traditional credit check.

According to a research study from The Motley Fool, 38% of respondents across all age categories had used a buy now, pay later service, with users being in the younger demographic categories. As mentioned, BNPL usage has increased recently. The Motley Fool research showed that among people who have used a BNPL service, 45% first did so in 2019, 21% first did so in 2020, and only 7% had used a BNPL service prior to 2015. While older consumers are not extensive users of this service right now, the older user base is expected to expand as BNPL providers expand the numbers and types of merchants they partner with to include retailers geared to older consumers. 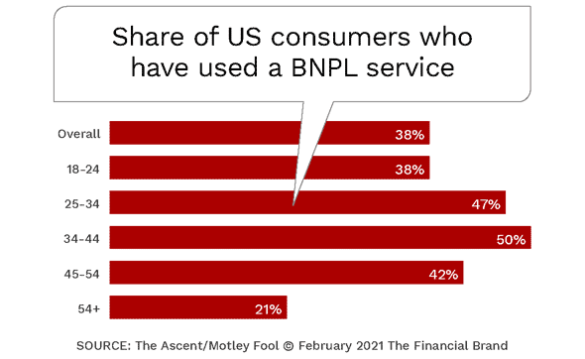 Not surprisingly, where a debit or credit card may be used dozens of times during a year for payments of all sizes, at any type of merchant, BNPL usage is far less frequent, even among fans of the service. Among those who use a BNPL service, approximately a third use the service once a year or less frequently, while 21% use it every six months. Another 21% use the service every three months, and 30% are more frequent users. BNPL providers are looking for more ways to build frequency with their offerings, including loyalty programs and other direct to consumer incentives not tied to specific merchants.

There are many reasons why consumers opt for a BNPL solution. The top mentioned reason is the ability to buy something without paying traditionally high credit card interest. Instead of interest, most BNPL alternatives charge late fees. With a buy now, pay later service, there’s the potential to pay no interest at all, as long as items are repaid within the agreed-upon time frame.

As the name implies, the second most mentioned reason for using the BNPL service is that the consumer can defer payments until a later time, splitting up the cost into smaller installments for improved cash flow purposes.

Since many BNPL users may have less credit history or even potentially derogatory credit histories, the use of advanced data models to ascertain the ability to repay (as opposed to extending a greater open line of credit) allows a much broader consumer market to access this service. 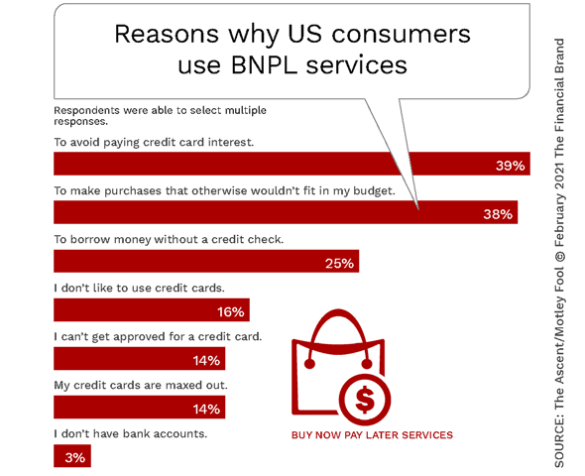 As part of the research from The Motley Fool, consumers were asked what they purchased using a BNPL service. There was a significant diversity as shown below.

When non-users were asked for the reasons why they had not used the buy now, pay later service, 82% stated that they preferred to pay with cash or debit card, 50% said they would defer payments using a credit card, and 49% stated they did not fully understand the service.

While buy now, pay later services still represent a relatively small component in the overall payments ecosystem, the service should not be ignored, especially because so many large providers are entering the provider marketplace, including the major credit card companies, the largest big tech firms and organizations like PayPal. With the buy now, pay later market expected to grow almost 400% by 2025, incumbent card issuers and lenders that rely on plastic payments and outdated lending processes could lose out to the likes of Affirm, Afterpay, Klarna and PayPal.

The biggest draw of the BNPL service is the ease with which this digital service can be used. And, many BNPL providers are expanding how they reach consumers and offer them their service. This includes the offering of debit cards as well as other services.

Affirm is joining other BNPL providers by expanding access to their solution with the Affirm debit card that can be used anywhere, with the extension of payments available post-purchase. There are also several players who are considering expanding their services beyond payments, with Klarna already having a traditional banking license in Sweden and offering a savings product in Germany.

As acceptance increases, traditional providers of consumer credit could lose not only card business (and the accompanying interchange, interest and late fee income), but could also lose modest sized consumer loan business. In other words, this service can eat into profitability and impact overall consumer relationship loyalty with one of the more coveted segments — younger consumers.

In response to this competitive threat, some traditional financial institutions are offering similar services. Citigroup offers Citi Flex Pay and Chase introduced My Chase Plan, allowing consumers to spread the payments for large purchases over time for a fee. Potentially hurting the competitiveness of these services is that they are still linked to a credit card with the need for a traditional credit bureau report.  Mastercard and Visa are also working with issuers on ways to split transactions into installments.

The BNPL Opportunity for Financial Institutions

Research by the Citizens Financial Group indicates that 76% of consumers would be more likely to make a retail purchase if an easy and simple payment plan was offered at the point of sale. The application for credit, or even the using of a credit card, is not a preferable option for many consumers. They want a low cost option to pay for a purchase over time that is available at the point of sale.

The options for traditional financial institutions include white-label partnerships with existing platforms, or building and launching a custom platform built in-house. A few financial institutions have offered a white label option in partnership with third-party providers. The challenge usually is the concern around the negative impact on current credit card portfolios and the ability to accept the alternative credit scoring algorithms used to offer a buy now, pay later option to a broad audience.

This alternative credit solution needs to be viewed as a digital alternative to reach a market not effectively served today. If modifications are made to the service to ‘fit’ into a current product set (like a traditional credit card), the offering is less likely to succeed. If the service is built as a digital offering to meet the needs of an unserved segment looking for a way to access an immediate and easy to use deferred payment option at the point of sale, a longer-term relationship with the consumer is possible.