A showcase of 11 different creative marketing initiatives from banks and credit unions around the world.

Someone snapped a photo of this transit ad from Citi. The bank can certainly benefit from a little lighthearted humor right now. 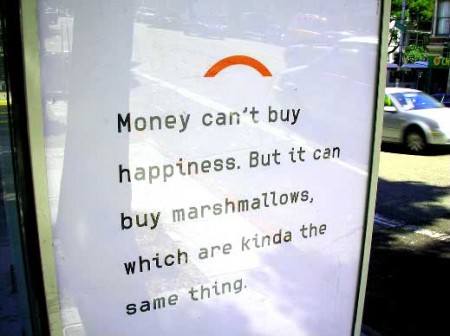 This 30-second TV spot, made specifically to air during the 2010 Superbowl, involves a clever pairing between the soundtrack and visuals: a dog puts his head out of a car window and his gums flap in the wind to a victorious operetic performance. It’s fun to watch. Agency: Weber Marketing Group. 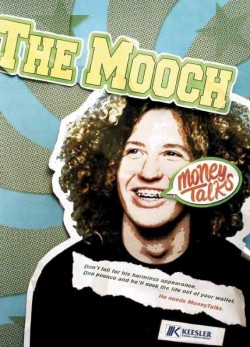 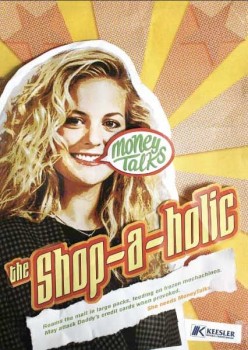 In this brand ad campaign for one of Australia’s larger financial instituions, St. George depicts itself as a “big bank,” something that has been out of vogue lately. The message: “Just because you’re big, doesn’t mean you have to act like it.” 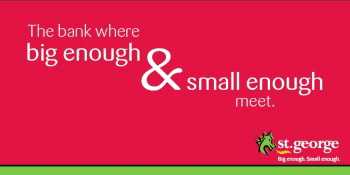 This Pennsylvania credit union teamed with internet sensations Rhett & Link (formerly of Alka Seltzer fame) to create an online commercial that must be seen to be to be believed. The video opens with a guy wearing a deer — err, make that a “buck” — costume getting hit by a car. The concientious motorists take the wounded buck to Bucks First FCU because they “treat bucks right.” Get it? The 90-second pun-o-rama has been viewed over 365,000 times with an average rating of 4.5 start (out of 5). Some observers in the financial industry have heralded the spot as an online marketing and social media triumph deluxe, while others have wondered if the video sends the right message about the credit union’s level of professionalism and financial acumen. What do you think?

The first thing you should notice is how clean and refreshingly uncluttered the site is — markedly unbanklike. Then there is the interactive wall of testimonials with pictures and quotes from 75 different bank customers right on the homepage. This is one of the more interesting bank websites you’ll see. 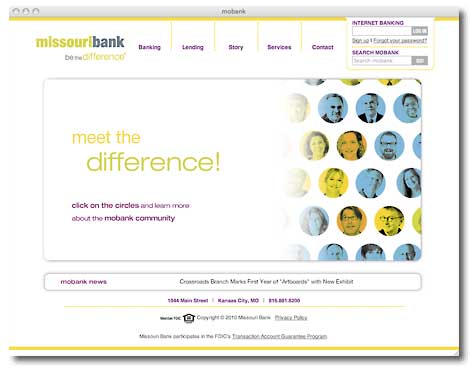 Community Savings – “Piece of the Pie”

In Canada, it’s quite common for credit unions to give some of their profits back to members as “patronage dividends.” Promoting them the way Community Savings did prior to its merger with Servus is not common, however. The credit union boxed pies and printed messages on napkins encouraging everyone to “get their piece of the pie.” It’s a fresh take on what is arguably the hardest working pun in the financial industry. 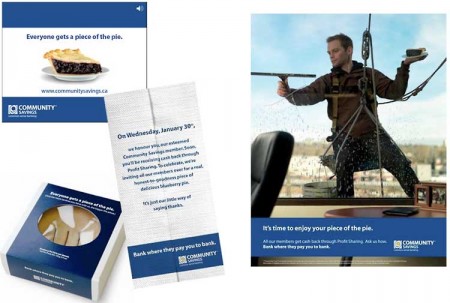 Australian Bank ANZ (pronounced “a-n-zed”) debuts a pair of spots about fraud, unauthorized online purchases and its “Fraud Money-Back Guarantee.” The spots portray the bank’s fictional Fraud Squad as a ridiculously zealous group with some wildly innovative (if not impractical) ideas for how to keep customers safe. The five-week campaign is supported by outdoor, online and ATM marketing. Agency: DDB Melbourne.

Agency Raoust + Partners turned what could have been just another boring auto loan product promotion into something visually interesting by drawing on car-related imagery. The checkered flag, chrome lettering and dashboard gauges are nice touches. 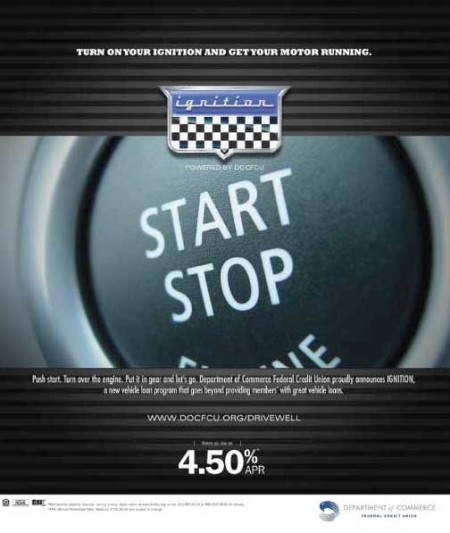 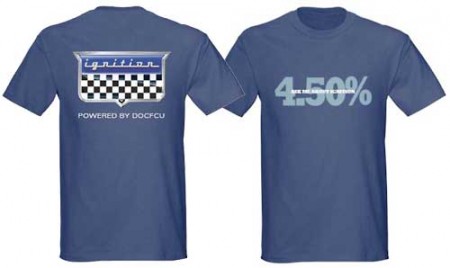 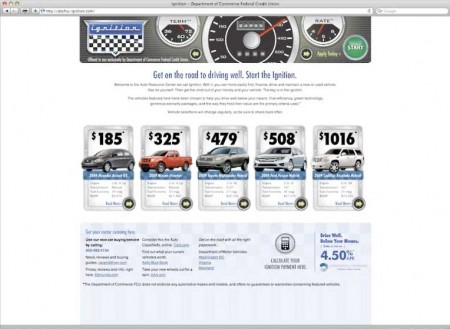 Many banks and credit unions have been quite comfortable — and arguably successful — celebrating a single point of differentiation: they are too small for bailouts. While the heyday of headlines like “Bailouts are for boats” and anti-jet banners has passed, there’s enough residual consumer resentment towards the financial industry that the bailout-bashing angle still has some traction.

Like many community banks, Pinnacle wanted to make the most out of Huffington’s “Move Your Money” populist campaign, so they created this email marketing piece. The message isn’t promotional nor self-serving in any way. It simply invites people to check out the “Move Your Money” website and viral YouTube video. Lots of banks looked to capitalize on Huffington’s efforts, but not that many were willing to help promote like this. 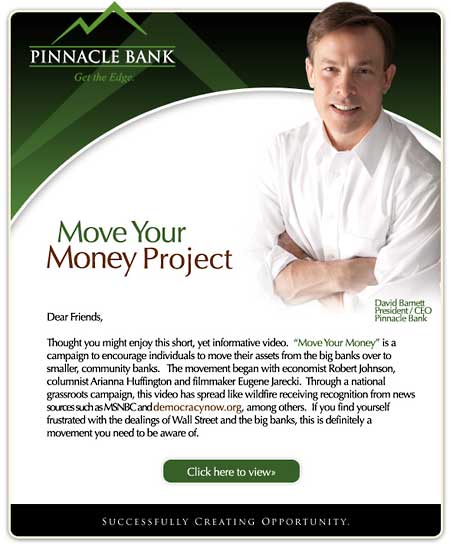