Subscribe Now Get The Financial Brand Newsletter for FREE - Sign Up Now
With nearly 10 million members and international operations, the largest U.S. credit union provides extensive service both in-person and digitally for every branch of the military. Even with COVID's push toward mobile and online banking channels, strong emphasis on live branches will continue.

Navy Federal, the nation’s largest credit union, strives to maintain a strong customer experience. So strong, in fact, that its CX performance has put it at the top of the multichannel bank category in Forrester’s U.S. Banking Customer Experience Index for five years in a row. In Forrester’s words, Navy Federal “gives customers the highest percentage of effective, easy, and emotionally positive experiences.”

Performance like that requires firing on all cylinders. To find out how Navy Federal does it, The Financial Brand spoke to both Tim Day, VP, Digital Experience, and Richard Allen, VP, Branch Operations, to understand the role both digital and physical channels play, and will play, through and past COVID-19.

Journey Mapping Can Help Get Inside Consumers’ Heads

Financial institution digital channels can have great design elements and load like lightning, but if they are stuffed with hazy banking jargon and have a confusing flow, the customer experience will leave people dissatisfied.

Issues like this are why Navy Federal Credit Union puts so much stress on journey mapping. Tim Day says the digital labs team that comes under his section handles journey mapping in cooperation with many functions that serve consumers, attempting to improve everything about digital and other experiences.

“We find ways we do things really well and others where there are opportunities to improve,” says Day. Sometimes the challenge is making language clearer. For instance, it’s common for financial institutions to make references to “ACH transactions,” a term that is fairly opaque to most nonbankers.

“Normal people don’t know what ACH means and they don’t necessarily understand why it can take a couple of days for money to move,” Day explains. “There are opportunities to explain things in intuitive human terms instead of industry jargon.”

However, Day says Navy Federal recognizes that over time financial institutions can unconsciously “train” their customers or members in their own mix of English and bankspeak. “So while we test the language we use for new features with members, sometimes we’ll test things with people who aren’t members.” These outsiders may provide a better cold read.

Sometimes the problem isn’t just unfriendly terminology, but a flow that doesn’t appear logical to people.

For example, says Day, “if I haven’t been approved for credit card service yet, then why ask me to set up automatic payments now?” Looking at processes this way can send planners and designers back a few squares.

A Credit Union With a Reach Rivaling Many Banks

Navy Federal, with $131.7 billion in assets, serves over 9.7 million members in the U.S. and overseas and operates 343 branches, with about one in five of those being on military bases and 8% in international locations. (Navy Federal, incidentally, does not maintain branches on any ships.)

In spite of its name, Navy Federal membership is open to military members and veterans and families from the Army, Navy, Air Force, Marines, Coast Guard and Space Force. About 11% of members currently are active-duty military.

The credit union has been a strong spender on digital for years, notes Day, because “even though we have an international branch network, we can’t be everywhere all the time. Digital solves that.”

That’s especially important for active-duty members, he says, who may have to drop everything and ship off to another part of the globe.

What Navy Federal Has Learned During the COVID Crisis

Like many other financial institutions dealing with coronavirus effects, Navy Federal has seen significant adoption of digital services during the coronavirus pandemic. About 22% of members who hadn’t used digital channels before tried at least one and about 77% of those newcomers have continued to use digital even after branches began to reopen after the initial COVID shutdowns, according to Day. Mobile app use is up about 14% and use of online services is up about 18%, in terms of number of users. Beyond basics like checking account balances, significant increases have been seen in such digital transactions as credit card applications, debit card activation, mobile deposits and use of Zelle.

“So we see a sticking pattern,” says Day, who’s been on board for about ten years, pretty much from the debut of the institution’s mobile app.

“We’ve always encouraged members to use digital because we think it’s the right move for most of our members,” he says, “but we’ve never steered them to use digital only, or to push them towards digital at the expense of our contact center or our branch network.”

Indeed, when asked about the concept of remote video appointments between members and staff as a standard practice after the pandemic — much like the booming telehealth trend — both Day and colleague Richard Allen say members have expressed virtually no demand for something like that.

If there was, Navy Federal would pounce on it. But even with COVID restrictions and consumer worries about catching the virus, if someone really wants a face-to-face meeting, Allen says, that’s what they still want, not a virtual one. 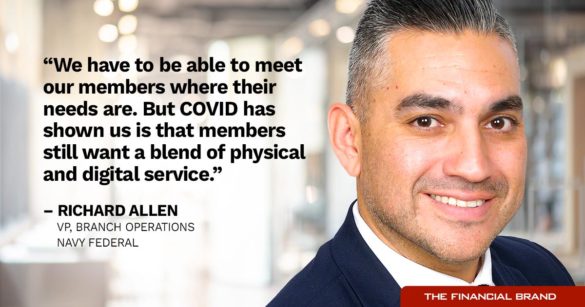 And while many functions can now be performed online and on mobile devices, the credit union intends to maintain a robust number of branches going forward. Allen, who handles over 100 locations in the western U.S., says a key point in branching for the credit union has been where members choose to live. When enough people congregate in a given area, that’s historically been a factor in siting a branch there.

That will continue, even as digital usage increases.

Most Members Want a Mix of Channels

“Digital has been key because we have to meet our members where their needs are, but COVID has shown us that members want a blend,” says Allen. “We still have members coming in to ask questions at branches. We have to be able to strike a balance between the personal interaction that’s important to our members while also giving them tools to access for transactions that they don’t mind doing by themselves. And there’s no replacing the level of financial education and connection that our members get from our teams in the branches.”

At present members have been asked to restrict their in-branch visits to what can reasonably be accomplished within 20 minutes. Visitors are held to a one-to-one ratio with branch contact staff. All customer-facing staff in branches are trained as universal bankers, from branch leaders to member service representatives, so they handle most requests without having to ask the member to go back outside while a specialist is contacted.

“It’s pretty seamless,” says Allen. He adds that universal banker training has helped through much of 2020 because these broadly trained staffers can be shifted to call center duty or even to specialized areas like mortgage lending, currently in high demand due to the low-rate environment.

While the COVID era may drive changes in approach for branches once it is over, Navy Federal intends to maintain its system and even add branches, he says.

“That’s the duality of it,” says Allen. “There are things that can be done quick and easy, in the palm of my hand. But when I really need some advice, some direction, some handholding, I can go to a branch and I can get that.”

Improving the Digital Side of Navy Federal

A key user experience factor that Day works towards is a common look, feel and functionality for the credit union’s website and mobile app.

“We used to have a more siloed mobile team and a more siloed online team and that was good for getting mobile up to where it needed to be,” says Day. “But it led to some inconsistencies between channels.” Now they employ a user experience team working across both functions.

“Being member-focused, rather than focused on the channels, makes Navy Federal stand apart,” says Day. Beyond that, member service representatives are trained to show people how to do things digitally when they come to a branch, to show them the convenience that’s already available. Navy Federal is currently piloting a demo app that functions exactly like the real one.

“That leads to consistency in what they’re delivering,” says Day, and helps onboard the newcomer more rapidly.

Blending the Human and the Digital

One of the points that keeps members interested in the human element is that employees will tend to anticipate questions, and be ready to suggest next steps. Day wants to bring more of that to digital interactions.

In one sense, this means building systems so that when something comes up in the consumer’s transactions, some steps will automatically be handled and the digital channel will simply say, basically, “This happened, we handled it, and we thought you’d want to know.”

In other cases, the appropriate response from Navy Federal may be to suggest next steps, digitally, and make it easy for members to move in that direction.

In other situations, having systems send queries to members might be the best way to help them with money management.

“An example could be using data to provide more insights, like, ‘Did you notice you were charged for that subscription? Are you using that service anymore? Maybe you want to look into that’,” says Day.

Much of that part of improving customer experience has become a continuous process, says Day, not an event.

“I don’t have any timelines to announce,” he explains. “These are things that we continue to look at.”

The most important thing in moving forward here, he says, is recognizing that consumers have varying preferences for change. Take budgeting.

“You have a subset of people who are willing to use digital tools exhaustively to track their finances,” says Day. “But most people just want to see things at a glance.”